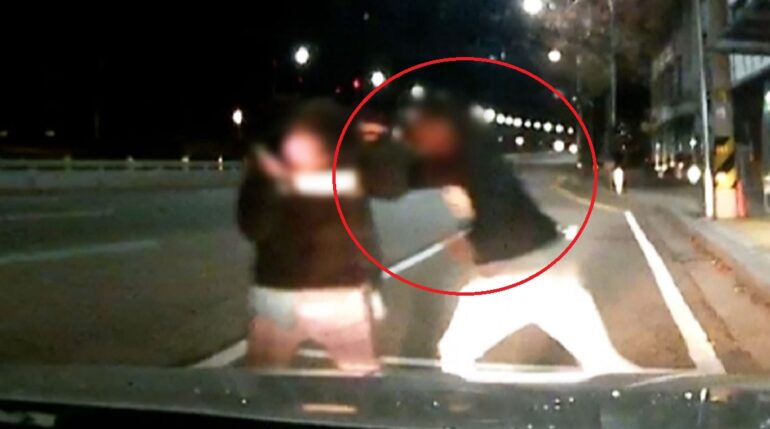 SOUTH KOREA—A U.S. Soldier who allegedly beat a taxi driver so severely that he was unable to work for a few days due to his injuries was designated a criminal suspect by local authorities.

The attack was captured by a dashboard camera inside the taxi at 1:30 a.m. on November 27. The footage shows the 58-year-old taxi driver crouching over in an attempt to shield himself from the assailant’s punches.

The U.S. soldier is described as African-American, according to K-Bloggers.

According to JoongAng Daily, the assailant got into the taxi near Itaewon station, Yongsan District in central Seoul, and got off across the road from Seoul Air Base in Sujeong District.

The American soldier appeared to be intoxicated when he got into the cab. A Caucasian Korean-speaking friend gave the soldier’s destination to the driver.

During the drive to Seongnam Air Base, the soldier asked the driver at least four times to stop the vehicle so he could open the rear door, for reasons that are unclear, according to the taxi driver.

Upon arrival at Seoul Air Base, the soldier attempted to pay for the fare with a credit card, which was declined.

Both driver and soldier headed to an ATM at a nearby convenience store, where the soldier explained he would withdraw money.

However, as both individuals passed the front of the taxi—and in full view of the dash cam—the soldier began to violently attack the taxi driver.

“I covered my face with both arms because I thought I should try not to get hit in the face, but he hit my head so hard from both the front and the back,” the driver said in an interview with SBS.

“I vomited when I got home. Even now, I feel nauseous and my head hurts so much that it’s so hard to live my daily life.”

“Although I still feel sick, my circumstances are such that I can’t afford to stay in the hospital for treatment, so I’m just hanging on by taking medicine at home,” the driver added.

Under the South Korea-U.S. Status of Forces Agreement (SOFA), South Korean authorities have jurisdiction over all crimes committed by members of the U.S. military committed within its territory and are punishable under its law.

Authorities said they would bring in the assailant for further questioning.