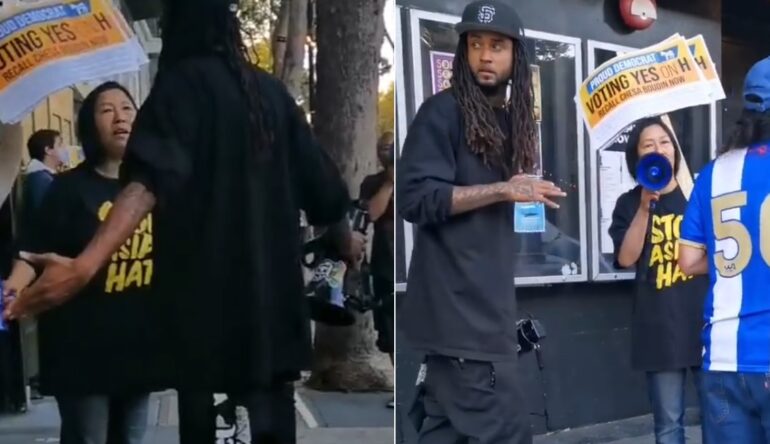 SAN FRANCISCO, California—Dozens of Asian-American protestors took to the streets on Wednesday, May 18, and exercised their First Amendment right to freedom of speech and assembly by supporting the recall effort of San Francisco District Attorney Chesa Boudin.

Activist Leanna Louie wearing a “Stop Asian Hate” T-shirt with signs “Yes on H, Recall Chesa Boudin” walked up and down the street saying the names of our Asian brothers and sisters viciously murdered in the most progressive city the last year.

“Hanako Abe, Grandpa Vicha Ratanapakdee” were some of the names Louie recited with her loudspeaker. However, Louie was interrupted by counter-protestors who stated Asians were supporting “white supremacy” by mourning their dead and supporting the recall effort.

“They don’t care about Hanako Abe, Grandpa Vicha Ratanapakdee, Jace Young, Jerome Mallory. These are innocent victims who did [no] harm to anyone! Where is their justice??”

“This is what happens when a group of Asians exercise our First Amendment Right for freedom of speech and assembly. Chesa Boudin sends his usual thugs to harass us and tried to push us out of a public street! If this is Chesa Boudin’s idea of Democracy, do you want this to continue? We can’t even have a peaceful protest without thugs harassing us!!” Louie wrote.

“Do you recognize the thugs harassing us? The tall one with long dreads is a repeat criminal, Androa Anderson! We finally meet face to face today. The last known and recorded crime Androa did was sucker punch a young Black gentleman named Timothy Anderson for peacefully protesting across the street from the Twitter Building in October 2020. Androa is out on the streets, thanks to his buddy Chesa Boudin!”

Counter-protestors became furious when Asian activists recited the names of murdered Asians and demanded they recite the names of fallen criminals who were “murdered by the police.” Other counter-protesters were furious Asian-Americans walked into “their neighborhoods.”

“These thugs only care about us saying names of repeat criminals who committed crimes and died during their criminal acts. Really? How about the innocent victims who were hurt or killed by street thugs??”

Asian-Americans must support Black Lives Matter and must first mourn the lives of all the fallen African-American criminals who were shot dead by the police before they can begin to mourn the deaths of members of their own community. Those are the rules. Asian-Americans should do as they’re told.