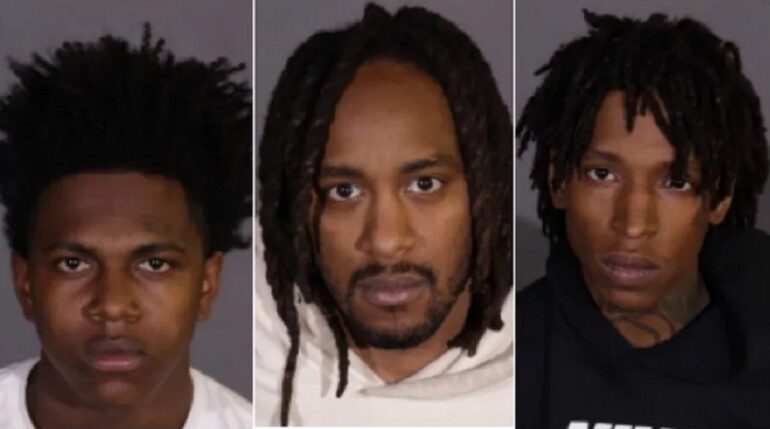 LOS ANGELES, California—Three men have been arrested in connection with several follow-home robberies across Los Angeles.

The men were identified as Matthew Adams, Eric Wilson, and Jayon Sparks. During their so-called crime spree, Adams was arrested and released from jail three times, reports KTLA5.

On January 7, a male victim was followed home from the Hollywood area to Burbank. As he was getting out of his vehicle in the 900 block of Tufts Avenue, he was approached by three armed African-American men. The suspects demanded the victim’s property and he complied, police said.

The very same day, a man and woman were returning home from dining at a high-end restaurant on Melrose Avenue in Hollywood.

The couple noticed a vehicle follow them into their garage, but they parked and went into an elevator, according to KTLA5.

As the elevator door was closing, Adams and an unidentified suspect allegedly ran into the elevator. While one suspect pointed a gun at the victims, Adams allegedly removed the man’s watch, wallet, and smartphone.

On January 14, Adams and another suspect robbed two men visiting the country after they left a nightclub and followed them back to their hotel.

On January 20, two men were robbed as they left their hotel to buy food around 1:50 a.m. Those two men were approached by Adams, Sparks, and four or five additional people armed with guns. They were robbed of their watch, jewelry, cash, and a purse, reports KTLA5.

Sparks and Wilson were arrested by police on March 24 and two firearms were recovered inside their vehicle. Sparks was arrested on suspicion of robbery, while Wilson was arrested on suspicion of a weapons violation. Authorities then searched their apartment along the 7300 block of Santa Monica Blvd in West Hollywood and found stolen items in previous robberies and multiple weapons.

On March 30, Adams and another man approached two UCLA students around 2:25 a.m. One student was pistol-whipped while the other suspect took two high-end watches and an iPhone, totaling $145,000, according to KTLA5.

Adams was arrested on suspicion of robbery during a traffic stop on March 31.

On April 4, prosecutors filed multiple charges against Adams, including seven counts of robbery and two gun enhancements, police said. Adams’ bail was set at $450,000. He was tied to other recent incidents and faces 20 or more years in prison, police said.