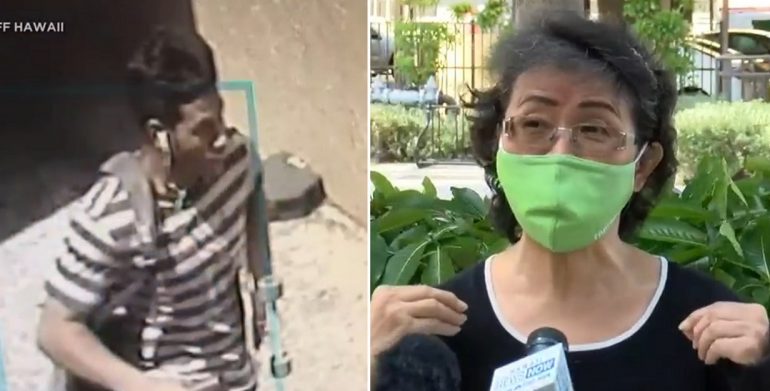 HONOLULU, Hawaii—Violet Hoi was walking near Cultural Plaza in Chinatown after eating lunch last Friday, September 18, when she was violently attacked and robbed in broad daylight.

Honolulu police are asking for the public’s help to identify and find the man responsible for Hoi’s vicious attack that sent her to the hospital, according to Hawaii News Now.

“He punch me, push me down on the ground very strongly,” Hoi said. “I tried to ask someone to help, but nobody come out and then I run and he just point and finally, I couldn’t get him.”

Hoi suffered injuries to her head and back. She was also body slammed to the ground.

“I immediately talked to my wife and she was, actually, she broke down in tears because she was worried that something fatal might have happened to my mom,” said Herman Hoi, Violet’s son, after receiving the emergency call.

“So it definitely was not a good feeling for the first five minutes after getting that call.”

Although shaken, Violet told Hawaii News Now the attack won’t discourage her from going back to Chinatown, but her son feels otherwise.

“I think definitely it’s a no,” Herman Hoi said. “My mother, she has a positive attitude and I think she really believes in the goodness of people. It’s not gonna stop her. It’s not gonna discourage her, but at the same time, we’re gonna really maybe help her plan ahead and go to different places where there’s more people.”

Thankfully, Violet Hoi didn’t carry much money—she was more concerned about something else.

“I feel really bad in that moment and I just concentrate and think about my ID in my wallet. I no have money. I have credit card, but ID for me is very important because I need to renew my driving license,” Violet Hoi stated.

Anyone with information about the incident, please contact Honolulu Crimestoppers.