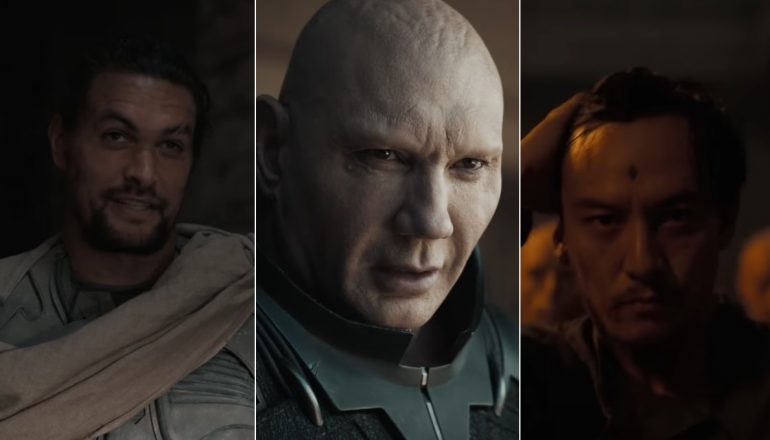 Based on the 1965 science-fiction novel by Frank Herbert (which he wrote after taking psychedelic mushrooms) and later inspired Star Wars, Tremors, and Game of Thrones, comes Denis Villeneuve’s (Sicario) Dune, from China’s Legendary Pictures and Warner Bros. Studios.

The story takes place thousands of years in the future where mankind has spread throughout the universe. The universe is controlled by an ancient feudal system ruled by the Padishah Emperor Shaddam IV. Hundreds of planets are controlled by different great houses that serve the emperor under this feudal system of governance.

The most important resource in this time period is spice. It allows space travel to be possible, it extends life for those wealthy enough to consume it and it only comes from one planet called Arrakis, also known as Dune because the entire planet is one giant desert and inhabited by giant sand worms and an indigenous group of people called the Fremen.

The story is basically about a handful of houses fighting for control of Dune. Because whoever controls the spice, controls the universe. It’s obviously slightly more complex than that, but basically think of Game of Thrones in space and instead of magic, there’s technology.

Some of you are old enough to remember a Westwood PC game called Dune II: The Building of a Dynasty in 1992. The game is based on the Dune novel and also the first game of its kind that would later spawn Command & Conquer, Red Alert, and Warcraft.

Dune was made into a movie before, back in 1984, directed by David Lynch (Twin Peaks, Mulholland Drive). The movie bombed at the box office because they tried fitting a 412-page book into a 2 ½ hour movie. That won’t happen this time around, the Dune 2020 movie is being split into two movies.

The casting choices are also top-notch with this new movie. Two Asians and one Pacific Islander.

Hawaiian Jason Momoa plays Duncan Idaho, Swordmaster for House Atreides. In the future, almost everyone has body shields, so guns are useless. Soldiers have to fight with swords again because shields have a weakness—they can stop fast-moving projectiles—but are useless against the slow cut of a blade.

Great news for an all-around great cast from top to bottom. Hopefully, these Asian Pacific Islander actors won’t drop the ball and Hollywood will continue to take on more Asian actors and give them more meaningful roles outside of kung-fu movies.