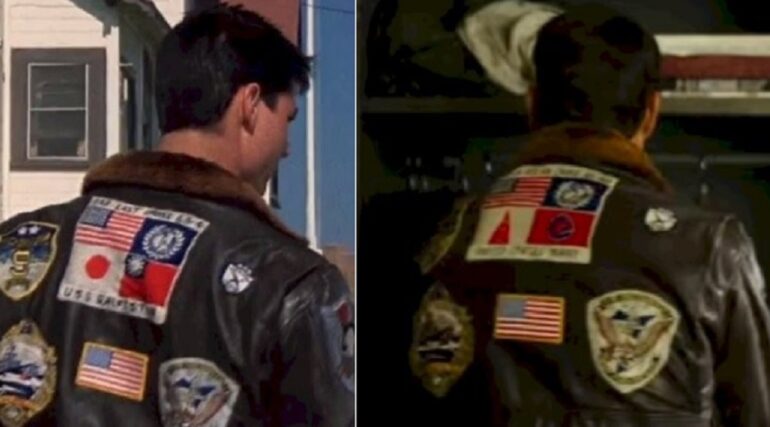 HOLLYWOOD, CA—Back in July 2019, the Top Gun: Maverick trailer showed the back of a leather bomber jacket worn by Tom Cruises’ character Captain Pete “Maverick” Mitchell which took out the Taiwanese and Japanese flags and replaced them with nonsensical symbols.

In the first 1986 film Top Gun, Maverick’s bomber jacket clearly displayed the Japanese and Taiwanese flags. The patches were meant to commemorate the USS Galveston’s tour of duty with the 7th Fleet from 1963 to 1964, when it performed missions off Japan and Taiwan, according to Taiwan News.

Many believed the initial decision to remove the flags was Hollywood’s attempt to please the Chinese government, mainly because Chinese internet giant Tencent was one of Paramount’s partners financing the film.

Taiwanese-American Christine Lu announced that she had seen the flags restored at an advanced screening at Naval Base San Diego on May 22, three years after the Maverick trailer dropped online, reports Taiwan News.

The Liberty Times also confirmed the original version of naval patches with the Taiwanese and Japanese flags are clearly visible.

Apparently, this move angered Chinese internet users who wrote: “You won’t make money off of us by showing it, we can just watch pirated copies.”

Over the last few years, fewer Hollywood blockbusters have been allowed to play in Chinese theaters, which has caused a rift between studios and the Chinese government. Japan’s Sony Picture’s Spider-Man: No Way Home was banned from China after the studio refused to edit out the final scene showing the Statue of Liberty.

The Late-Goo Hara’s Mother Wants Half Her Assets

Recently, Doctor Strange in the Multiverse of Madness was banned from China after Chinese censors saw a scene that briefly contained a newsrack belonging to The Epoch Times, an anti-Chinese government newspaper, reports CBR.

Back in 2019, China banned Sony’s Once Upon a Time in Hollywood, which was initially approved to be released in China. However, a campaign allegedly spearheaded by Bruce Lee’s daughter, Shannon Lee, attributed to China demanding Tarantino edit out Bruce Lee scenes because it made the character look arrogant.

Tarantino refused and the film was banned.