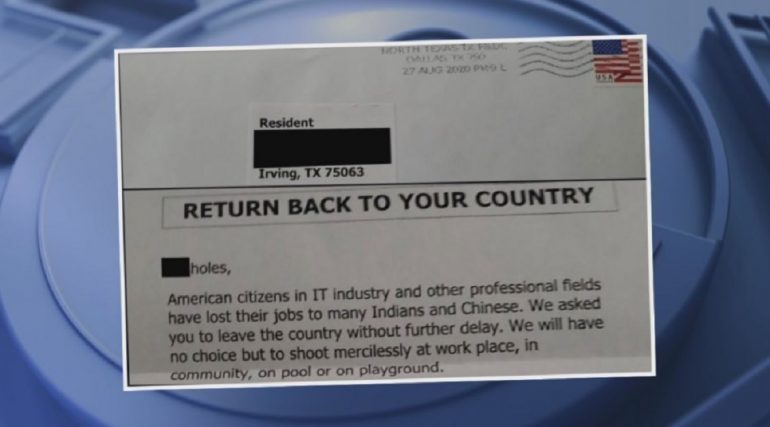 IRVING, Texas—A letter was recently sent to an Irving resident in which the writer threatens to “shoot mercilessly” Chinese and Indian immigrants working in the information technology field has law enforcement officials in the city on edge, according to Forth Worth Star-Telegram.

Multiple people may have received similar letters throughout Irving and other Texas cities, police stated. “This person is threatening to shoot up a pool area, a playground, a business, so anyone could fall victim to this,” said Irving Police Department spokesman Robert Reeves.

Reeves is asking anyone who received such a letter not to open it so it may be preserved for any type of forensic evidence, such as fingerprints or DNA.

The letter is headed with a message that says—“Return back to your country.”

“American citizens in IT industry and other professional fields have lost their jobs to many Indians and Chinese,” the letter said. “We asked you to leave the country without further delay. We will have no choice but to shoot mercilessly at work place, in community, on pool or on playground,” the letter continued.

Chinese and Indian immigrants “stealing” American jobs is just not true. America graduates 568,000 STEM students a year and half of them are Asian-American. America does not have enough STEM students to fill job posts throughout the tech industry, especially the IT department.

“Right now this is an isolated incident,” Irving police stated on social media. “If you have received a letter let us know. We take harassment and hate crime extremely serious.”

Please contact [email protected] if you have any information.