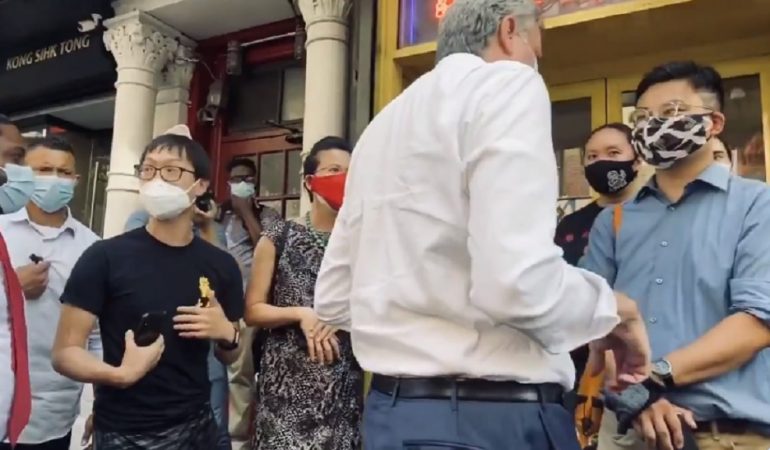 On Wednesday, August 12, Mayor Bill de Blasio was having a conversation with Chinatown bakery owner 26-year-old Patrick Mock of 46 Mott Bakery. The conversation seemed to be going well. Mock was explaining to de Blasio the struggles of what Chinatown has been going through and was giving various ideas on how to increase foot traffic throughout the neighborhood.

Mock’s idea was to close down some streets to car traffic on the weekends and create a night-market-like atmosphere for businesses. One of many great ideas to increase revenue for a financially devastated Chinatown.

“We want that type of energy throughout Chinatown because Chinatown is not only one block, it is a whole neighborhood,” Mock continued.

Many Asian-Americans feel betrayed by Mayor de Blasio, including Assemblymember Yuh-Line Niou. “This has been kind of a symbol. That is why it is so significant. I think, because we really feel like the city, the state and the federal government has turned their backs on us,” Niou stated.

Mayor de Blasio has been actively trying to go after the local Asian-American community for their dominance in specialized schools in the area, which require a SHSAT for admittance. Many of these specialized schools are more than 50% Asian and de Blasio views that as “racist.” Oddly, he’s okay with the NBA and NFL being more than 50% African-American.

The Mayor’s Office released a statement addressing the incident on Wednesday. “New Yorkers are never afraid to share their thoughts, and we’re grateful for his ideas and advocacy for his community. We know COVID-19 has hit small businesses hard, and we’re actively exploring more ways to help Chinatown recover.”