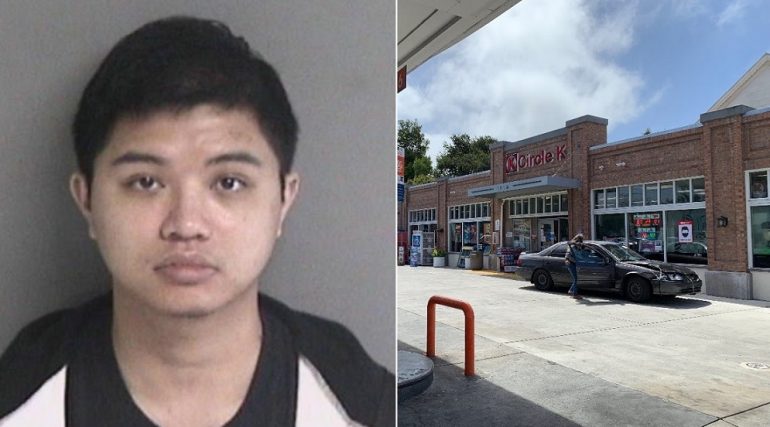 ALAMEDA, California—A store clerk, identified as 26-year-old Wenyong Huang was arrested for murder for allegedly shooting a thief without legal cause at a Circle K on Webster Street and Buena Vista Ave around 11:45 Saturday, according to Fox 2 KTVU.

“The customer went behind the counter and started to remove items,” explained Alameda police Lt. Ryan DeRespini. The clerk responded by pulling out a pistol and shooting the suspect in the head.

“And that point it appeared to be simply an attempt to steal merchandise from the store,” Lt. DeRespini continued. “At that point, he was accosted by the store clerk and almost immediately shot and killed where he was.”

Huang immediately called 911 and explained he shot a robbery suspect. However, after interviewing witnesses and reviewing the surveillance footage, police determined there was no holdup and the clerk clearly crossed the line by shooting dead 24-year-old Ethan Escorcio.

“It was determined that a robbery had not occurred and that that level of self-defense was not justified or appropriate for the crime that was actually occurring,” stated Lt. DeRespini.

Huang is currently being held without bail. He was also booked on suspicion of having a concealed firearm on him. “He did not have a CCW (carry concealed weapon) permit,” continued Lt. DeRespini.

The video footage and the testimony by Huang will be critical if the case goes to trial, according to Fox 2 legal analyst Michael Cardoza. “You have a clerk working who obviously got awfully nervous and I’m sure would tell the police that he thought that his life was in danger,” Cardoz continued.

However, looking at it the other way, clerks “can’t willy nilly shoot people,” Cardoza explains. “They have to step back and weigh in their own mind, ‘Should I shoot this person? Do I feel my life’s in danger?’”