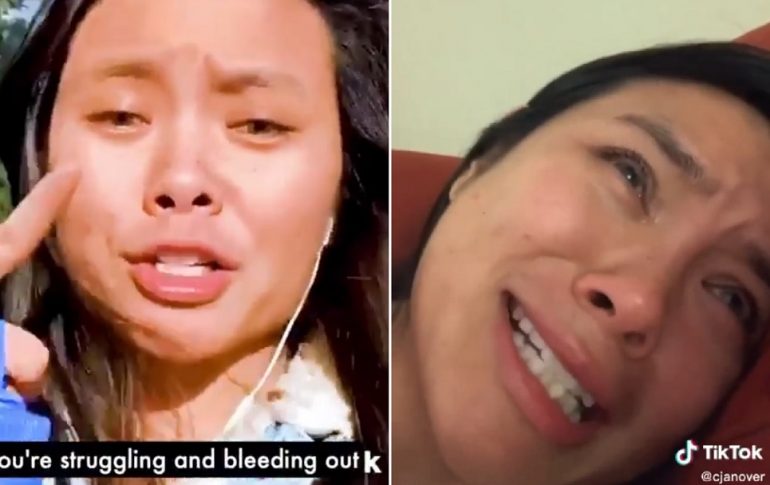 Harvard graduate Claira Janover went viral the other day after releasing a TikTok video. In this video, Janover states “The next person who has the sheer nerve, the sheer entitled ‘caucasity’ to say ‘all lives matter,’ I’mma stab you! I’m a fu*cking I’mma stab you!”

Well, Janover recently created a two new videos Wednesday afternoon, stating she lost her job over her TikTok post. “Standing up for Black Lives Matter put me in a place online to be seen by millions of people,” Janover tearfully stated. “The job that I’d worked really hard to get and meant a lot to me has called me and fired me because of everything.”

According to Janover’s LinkedIn account, she claims she’s a government and public business service analyst for Deloitte, a British owned accounting firm.

Janover graduated from Harvard in May. She has a degree in government and psychology. In her new video, she blames Trump supporters for getting her fired. “Trump supporters took my job away from me. I have gotten death threats, rape threats, violent threats. It was OK, but now my future’s entirely compromised because Trump supporters have decided to come for my life,” Janover rants.

Janover created a GoFundMe page titled “The Claira Janover is Incredible Fund.” She states on her page she’s unemployed and at “great financial and physical risk.” She’s raised $7.983 so far. Her goal is $10,000.

In this crazy world we live in, where a teenage Caucasian kid wearing a MAGA hat gets death threats for smirking at a Native-American elder chanting at him—Janover’s taped analogy and subsequent downfall doesn’t seem too unfair? At least she wasn’t smirking at anyone because that would have made her look like the anti-Christ?