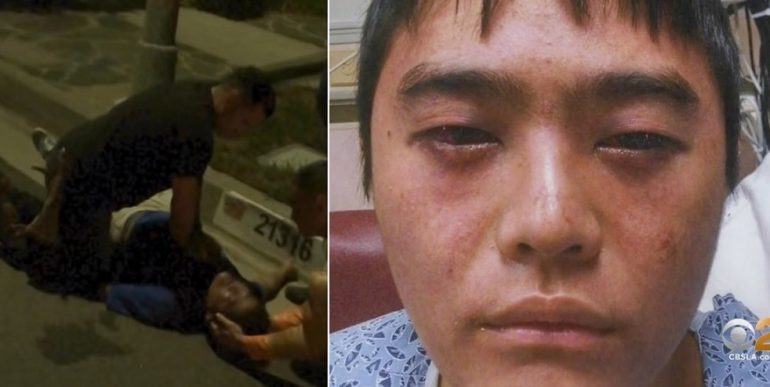 This article is dedicated to all those who want the Asian-American community to forget. We don’t forget.

The city of Los Angeles awarded Samuel Chang $7.4 million in February 2019 for the beating and choking he received at the hands of two off-duty firefighters on Halloween night in 2015 for passing out candy in his grandmother’s neighborhood in Chatsworth.

An Asian man visiting his grandmother in Chatsworth on Halloween night was viciously attacked by a group of racist, narcissistic, sociopathic firefighters, Eric Carpenter, and former child actor from the Sandlot who played Benny “The Jet” Rodriguez, Mike Vitar.

They literally did not stop choking him until his heart stopped beating. Fearing for their lives, they immediately administered CPR and successfully resuscitated Chang. The damage was done, however. Medical reports showed Chang suffered severe head trauma, bleeding on the brain, renal failure, and hemorrhage caused by suffocation.

The incident started when Carpenter in the He-Man costume, questioned why Chang was passing out candy in the neighborhood. Naturally, in a free country, Chang basically replied he could do whatever he wanted, and passing out candy on Halloween night seemed perfectly normal.

Carpenter was not having it. He began menacing Chang and other members of his party joined in, Vitar included, one member dressed in an extremely racist yellowface costume began making groundless claims Chang was passing out “drug-laced candy.” Chang tried running away at that point while filming the incident on his smartphone.

Carpenter’s party immediately tackled Chang to the ground and began asking him “Why are you passing out drug-laced candy?” Carpenter then began holding Chang in a headlock and every time Chang struggled, Carpenter squeezed harder and harder, enjoying every moment of it. Every time Chang begged to be let go, Carpenter replied “What drugs did you take? Why are you here? Stop fighting us.” Carpenter wanted Chang to be a subservient Asian and obey his every command and the hatred in his eyes was quite evident.

Chang screamed “I want to go home!” Carpenter carelessly replied “Yeah, so do I.”

The party called 911 and stated Chang was being extremely violent, very combative, he was passing out drug-laced candy and he was not doing what he was told. Chang’s heart stopped beating at that point and Mike Vitar immediately began administering CPR.

When police arrived, they escorted Chang to the hospital and took the candy he was handing out to children in the neighborhood and tested it for drugs. It was clean, 100%.

When the LAPD finished their investigation, they were so enraged, detectives actually recommended Eric Carpenter and those involved should face the maximum sentence on all counts. Jackie Lacey’s district attorney’s office actually charged the firefighters and a neighbor with felony assault. Carpenter was supposed to face up to seven years in prison.

However, when the case finally went to trial, what happened next, even stunned the LAPD. Eric Carpenter, Mike Vitar, and Thomas Molnar were allowed to plead no contest to a misdemeanor. And Carpenter only received three years probation and 135 days of structured community service. Carpenter and Vitar were also allowed to keep their jobs.

The end result stunned Chang as well. During an interview with Reporter David Goldstein, he stated “My heart stopped and blood stopped flowing to my brain, yet this wasn’t considered a felony? I was shocked.”

Many believe Los Angeles District Attorney Jackie Lacey cut Carpenter slack because he was a fellow African-American and a firefighter. Chang’s lawyer, David Ring believed someone put pressure on Jackie Lacey to go “easy on them” simply because two of them were All-American firefighters and Chang was just another Asian. Whatever the case, Chang received no justice and the money that was paid out to him by the city was actually insurance money that Los Angeles taxpayers are going to have to pay in premiums. Carpenter and Vitar paid nothing.