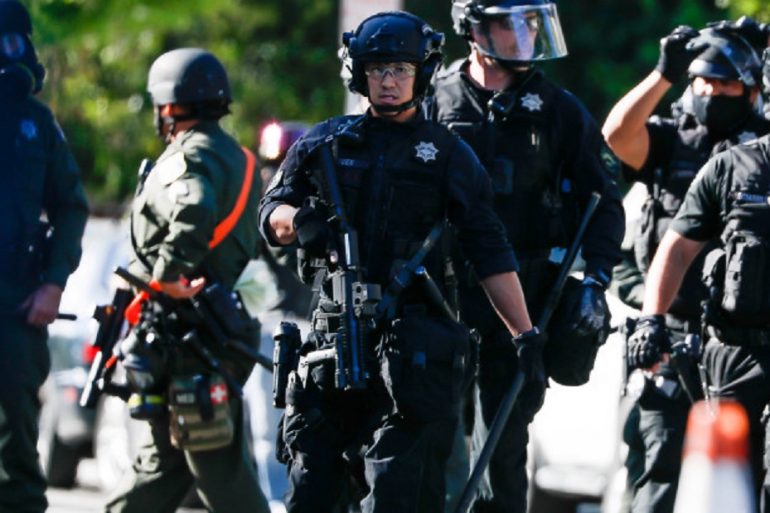 33-year-old San Jose police officer Jared Yuen has been removed from street duty by Chief Eddie Garcia, pending an internal investigation. San Jose Mayor Sam Liccardo is demanding answers and thousands of netizens are calling for Officer Yuen’s employment to be terminated, according to ABC7.

This whole saga began Friday during protests in San Jose. Two videos surfaced on Twitter, showing Officer Yuen smiling and seemed really happy about confronting protestors. He can be heard saying “Let’s get this motherfu*ker.”

Yuen’s demeanor angered some protestors, with one saying “This is funny to them, they’re having a blast, they have smiles on their faces.”

In a second video, a lady can be heard asking Officer Yuen “Why are you on that side?” To which Officer Yuen replied, “Shut up, bi*ch!”

Seconds later, Yuen decided to reach around an officer in front of him and fired a crowd control projectile point-blank-range at a random protestor. This pretty much signaled to the rest of the police force to charge, which they did.

“I’m not happy with his actions, I’m sure if Jared was sitting here he’d be embarrassed as well. But I will tell you, I know Jared and he’s a good kid who made a mistake who let his emotions get the better of him,” stated Chief Eddie Garcia of the San Jose Police Department.

Councilor Lan Diep, the only Asian-American on the San Jose City council does not believe Officer Yuen should be fired.

“We have to proceed and call out wrongs, but we need to provide space to win people’s hearts and minds and allow them a chance to atone and win allies as we continue on the righteous path,” stated to ABC7.

According to San Jose’s official city website, the city is 35% Caucasian, 31% Asian, 28% Hispanic, and 2% African-American. Voting power, Officer Yuen should not be fired because his employment is more representative of the community.

“Officer Yuen shouldn’t have smiled and fired the rubber bullet point-blank and he should be suspended. But I don’t believe he should be fired. Who’s demanding what? Other than the big corporations, Asian owned businesses are the ones getting destroyed and we don’t have a voice comparable to our population in SJ. Yuen should keep his job. Screw them,” stated San Jose resident P. Lee.