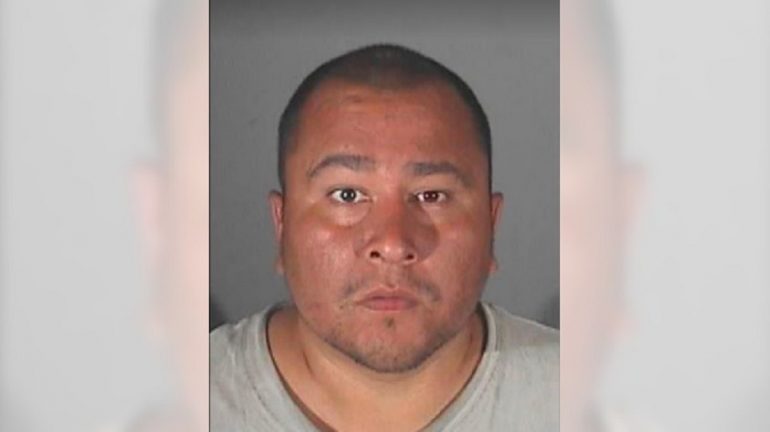 Oscar Villamil, 43, was arrested Jan. 5, 2021 in Pasadena on suspicion of killing an 80-year-old Pasadena woman during an assault on Colorado Boulevard on Dec. 29, 2020. Police alleged he allegedly attacked without provocation a couple in their 80s. (Photo courtesy of the Pasadena Police Department)

PASADENA, California—43-year-old transient Oscar Villamil was arrested Tuesday, January 5, for attacking an elderly Pasadena couple on their daily walk, according to Pasadena Star-News.

Pasadena police identified the victim who died on January 5, the same day Villamil was arrested, as 80-year-old Pui Gee Ng Lee of Pasadena.

Lee’s husband was also injured during the December 29 assault on the 100 block of East Colorado Blvd, according to Pasadena Star-News. His injuries were minor and he was treated at a local hospital and released shortly after the attack, according to Lt. William Grisafe, Pasadena police spokesman.

Villamil is also a suspect in a December 29 assault of a Metro bus driver in Pasadena as well, according to Ramon Montenegro, spokesman for the Los Angeles County Sheriff’s Department’s Transit Services Bureau. The bus driver suffered minor to moderate injuries and was taken to the hospital.

According to the Pasadena-Star News, deputies from the bureau’s special assignment unit had been looking for Villamil and received an anonymous tip Tuesday that he may be at the L line in Pasadena.

Deputies located Villamil Tuesday morning near the Fillmore station and found out he was wanted by Pasadena police.

The motive behind the unprovoked attack on the Asian couple, which happened at 7:52 am on December 29 remains unclear.

From the evidence gathered, detectives ascertained the couple was walking on the sidewalk when Villamil punched and kicked the husband and pushed the woman, causing her to fall and hit her head on the sidewalk.

The 80-year-old woman was in critical condition and was in and out of consciousness until she ultimately succumbed to her injuries.

Villamil was booked on suspicion of murder and for an outstanding battery warrant at Pasadena jail. He is currently being held at the Inmate Reception Center in lieu of $2,005,200 bail.

He is currently scheduled to appear in Pasadena Superior Court on Thursday, January 7. Villamil has prior convictions for assault with a deadly weapon, battery on an officer, battery by gassing an officer or employee at a detention facility, battery, child endangerment, annoying or molesting a child, receiving stolen property, vandalism, lewd conduct in public, and driving under the influence.

Police asked that anyone with information about the case to call Pasadena Police at 626-744-4241. Anonymous tipsters can call Crime Stoppers at 1-800-222-8477 or use the website lacrimestoppers.org.