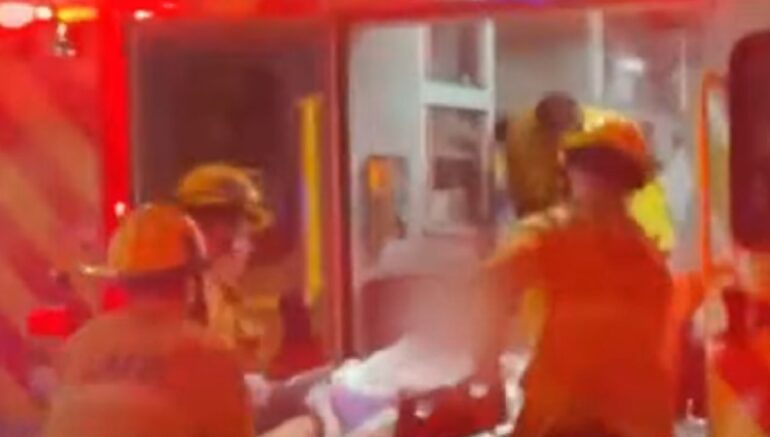 LOS ANGELES, CA—Two stabbing victims are in the hospital in critical condition after an African-American homeless man walked into a downtown Los Angeles Target, picked up a pair of knives from the store’s kitchen section, and started slashing people, including a 9-year-old boy.

Police officers responded to the incident near Figueroa and 7th Streets around 6:20 p.m. Wednesday.

The 40-year-old “male Black” suspect “dressed in homeless attire” initially confronted the 9-year-old boy and said he was going to “stab him and kill him,” according to Los Angeles Police Chief Michael Moore.

The homeless man stabbed the 9-year-old in the back left shoulder with a “long-bladed butcher-style knife.”

Another victim, a 25-year-old Korean female flight attendant visiting Los Angeles was brutally stabbed multiple times in the chest, causing her to fall to the ground. Good Samaritans were able to pull her into the pharmacy.

An armed Target security guard confronted the suspect and attempted to de-escalate the situation before discharging his pistol at the advancing homeless man, hitting him in the stomach.

Police officers were actually already in the downtown shopping complex on another call and were able to respond quickly to the incident and took the wounded suspect into custody, according to KTLA.

The 9-year-old boy was transported to the hospital and is in stable but critical condition due to potential neurological damage from the stab wounds.

The 25-year-old Korean female flight attendant is in serious condition after suffering multiple deep stab wounds to her chest. She is currently in surgery.

Christina Lee was Stabbed 40 Times and Found Half Naked

Another woman was trampled on by fleeing customers. She suffered minor injuries.

Moore said that police will remain at the scene through the early morning hours, reviewing security cameras, collecting evidence, and investigating the incident.