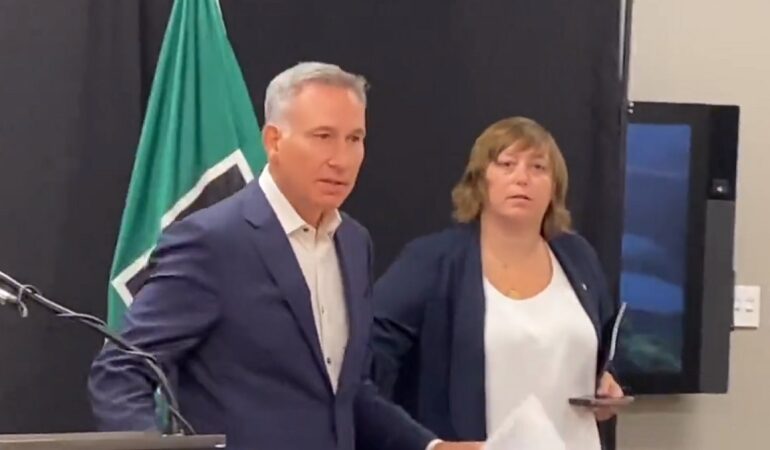 SEATTLE, WA—Residents in Seattle’s International District are irate with a King County plan to expand a homeless shelter into a “homeless megaplex” in their neighborhood.

Residents say they weren’t even consulted about the decision and many politicians have dodged Chinatown residents altogether—including King County Executive Dow Constantine and his staff.

Jonathan Choe—independent journalist and Discovery Institute fellow—asked Constantine about the criticisms and the executive did not respond well and accused the Asian-American journalist of essentially being a white supremacist sympathizer.

The visibly angry Constantine refused to answer any questions, questioned the journalistic integrity of Mr. Choe, and then retreated to a private elevator to avoid any further contact back in mid-September.

Community members say they were left in the dark about the shelter’s placement and county leaders are actively ignoring their plights.

During a press conference on September 13, Choe attempted to ask two questions about the shelter. Constantine initially turned to Choe and looked like he was about to answer but then he saw it was Choe and turned away.

“Well take any other questions…” Constantine said to the other reporters in the room before walking away.

“Here’s the problem. You’re not actually a journalist. You were fired for promoting the Proud Boys, so we talk with reporters like those in the room, and we’re not going to do this,” Constantine told Choe before hopping into a private elevator.

Man Arrested in Taiwan for $3M Home Invasion in SF

#EXCLUSIVE: Earlier today, @kcexec dodged my questions about the HOMELESS MEGAPLEX he's trying to RAM through #Seattle. #Chinatown-ID is begging him to put a moratorium on project until public comments are gathered. This is a TOP 3 story in the city. We need more MEDIA on this. pic.twitter.com/8cBYmsXEcM

Democratic politicians across the country are betraying Asian-Americans because Asian-Americans are now categorized as “white adjacent.” Liberals control Hollywood, the banks, higher education, as well as enjoy a majority in government.

“White supremacy” and “systemic racism” are the talking points for liberals, yet they control the institutions that uphold “systemic racism.” Hollywood would be one of the hundreds of examples of liberal racism. They’ve portrayed Asians as jokes and savages for several decades, yet, they argue conservatives are the ones pushing the dehumanization of Asians throughout.