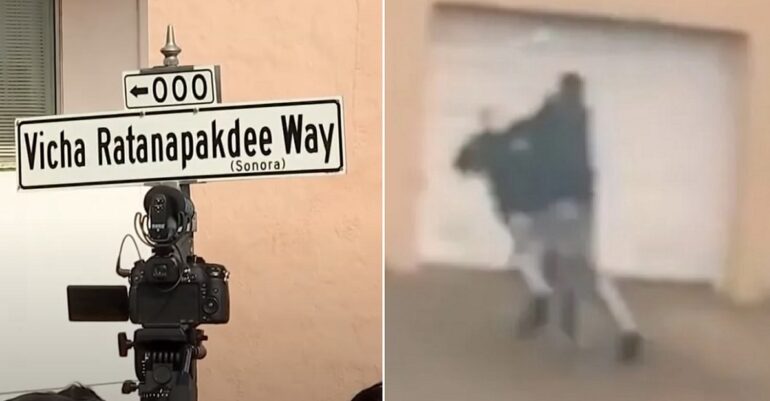 SAN FRANCISCO, CA—Nearly two years after his brutal death, the city of San Francisco renamed a street after the attack victim Vicha Ratanapakdee on Saturday.

The street connects with Terra Vista Avenue and O’Farrell Street in the Anza Vista neighborhood—the same neighborhood where he was murdered.

“We want to remind future generations in memory for my father. He passed in violence and pain, and we want our future generation to stop violence, Asian hate,” Vicha’s daughter, Monthanus Ratanapakdee stated.

Vicha Ratanapakdee’s savage death was captured in a surveillance video that went viral. The attack helped spark the anti-Asian hate movement across the country. He was violently knocked to the ground in an unprovoked attack during a morning walk back in January 2021 by 20-year-old African-American Antoine Watson.

Watson’s attorney, Anita Nabha, stated Watson was distressed after a “stressful encounter with police hours earlier” and may not have known Vicha was elderly, according to the San Francisco Chronicle.

Essentially, it was the police’s fault Watson pushed Vicha to his death. Nabha is building a case that charges should be reduced to involuntary manslaughter instead of murder and elder abuse.

When asked outside the courtroom what she wanted to see happen, Watson’s grandmother arrogantly laughed and said, “To see him walk out this door like I’m walking out right now,” back in February 2021.

San Francisco officials refuse to release the mugshot Antoine Watson because it will intensify anti-Black sentiment in the Bay Area community and devalue the life of a 20-year-old with a bright future ahead of him—compared to an elderly Asian man who neared the end of his life.

“Our culture — you know, Asian American — is scared to talk. They don’t want to go to report to police station. Like my mother, she’s scared. She doesn’t want me to go out and speak out in public,” said Monthanus.