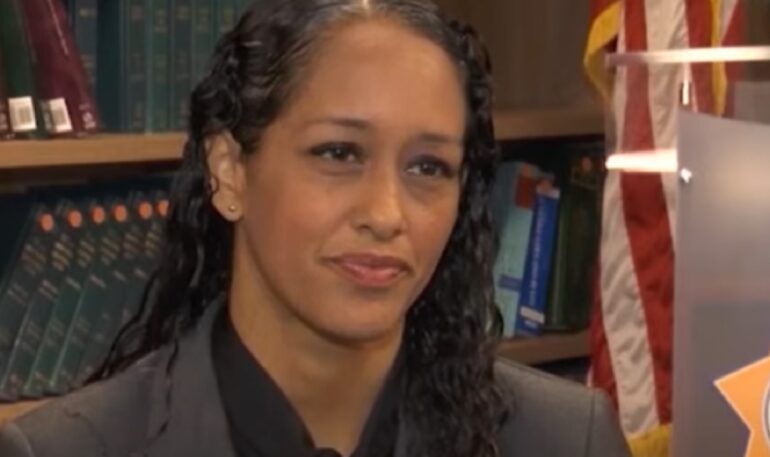 SAN FRANCISCO, CA—Brooke Jenkins, appointed to the position of San Francisco District Attorney by Mayor London Breed after the successful recall of Chesa Boudin over the summer, was not endorsed by the city’s Democratic Party on Wednesday.

That honor went to John Hamasaki, an attorney and former police commissioner, who does not support the release of mugshots of criminals.

“They are used by local media to inflame racial biases against non-white subjects. Banned in San Francisco,” Hamasaki tweeted back on November 11, 2021.

Hamasaki also deleted thousands of tweets right before launching his campaign for DA. The San Francisco Standard asked if he had anything to hide and he replied, “No, It’s an awkward story because I did use a program to delete ‘low engagement’ tweets.”

Joe Alioto Veronese was the Democratic Party’s No. 2 endorsement. KRON4 sources, including Boudin spokeswoman Rachel Marshall, stated Jenkins got no votes at all from the DCCC.

The Democratic Party has been in control of San Francisco for decades. If they were capable of fixing San Francisco, they would have done so generations ago.

A spokesperson for Jenkins’ campaign stated the DCCC’s decision was revenge for Jenkins’ involvement in Chesa Boudin’s recall, which DCCC opposed.

“District Attorney Jenkins is proud to have earned support from leading Democrats like Senator Scott Wiener and [State Treasurer] Fiona Ma and the Bay Area Reporter because they believe she is restoring accountability and safety to San Francisco,” the spokesperson stated. “Unfortunately, the DCCC has been driven by political ideology. They opposed the Boudin recall and just endorsed a candidate who has called for defunding the DA’s office that he is running for. They don’t represent a focus on public safety that the majority of San Franciscans are asking for.”

The San Francisco Democratic Party and ACLU released a newspaper ad with Rev. Arnold Townsend stating, “If this DA is recalled, it’s going to be open season on young Black men in the city,” in a last-ditch effort to prevent Boudin’s recall over the summer.

The ACLU and DCCC seem to suggest they’d rather have daily attacks against the Asian-American community go unmolested than see another “Black man” be sent to prison.