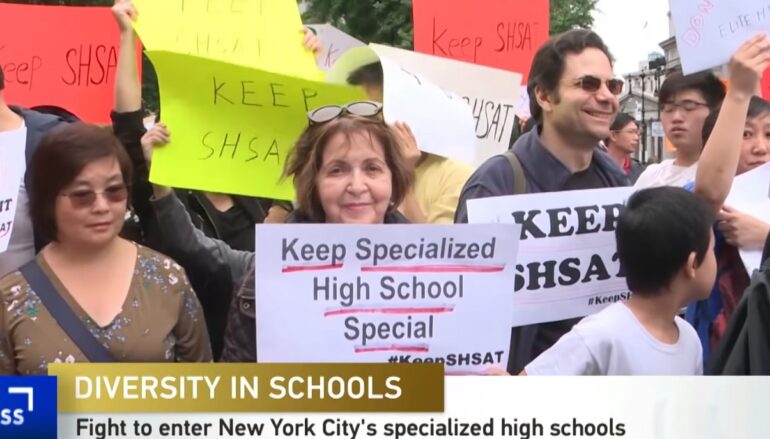 NEW YORK CITY—About 30 percent of Asian applicants failed to land any of their top 5 choices under new lottery-style admission rules for public high schools that minimize the importance of good grades, according to new Department of Education data.

Of the 12,082 Asian applying for freshman seats in city schools in the fall, only 8,484—about 70 percent—secured one of their top 5 picks. However, 90 percent of Black students and 89 percent of Latinos score one of their top 5 choices. These two groups together totaled more than 45,069 of the 71,349 applicants, according to the New York Post.

The citywide average is 83 percent.

Around 70 percent of the city’s 9,767 Caucasian applicants also landed one of their top 5 selections, while at the same time, students who classified themselves as “multi-racial” saw only 63 percent.

These numbers exclude the city’s nine specialized high schools, which still accept children based on merit and are dominated by Asian and Caucasian students. Other than the nine specialized schools, NYC students can list up to 12 choices in order of preference.

About 12 percent of both Asian and Caucasian students failed to land any of their high school choices for the fall, which leaves their designation at the mercy of the Department of Education. At the same time, only 3 percent of Black and 4 percent of Latino students were shut out, reports The Post.

New York City’s new admission system is based on a complex mathematical formula that utilizes “equity” in the city’s 400 high schools. Students with grades in the high 90s as well as students with average grades can land in the highest lottery group.

These students made up 63 percent of this year’s applicants—meaning they’re eligible to attend the most academically demanding schools. Meaning diversity is so powerful, that standards must be lowered for diversity to succeed.

Many school advocates blamed Asian students being shut out was because they didn’t self-lower their standards.

“This system did exactly what it was supposed to do. I hate generalizations, but it comes down to this: many Asian students are extremely high achievers, who have all A’s. What I suspect happened is many put down 12 schools that in the past were only for high-achieving kids,” stated Alina Adams, author of the book “Getting into NYC High-School.”

Asian students would have gotten into one of their choices in the previous system.

DOE officials also blamed Asian and Caucasian student lockouts on their tending to pick high-demand schools on their applications.

“This administration is committed to increasing access to high-quality education for all New York City students,” said DOE spokeswoman Nicole Brownstein. “This year, 75 percent of NYC high school applicants received an offer to one of their top three choices and 50 percent received an offer to their top choice — both increases from last year.”