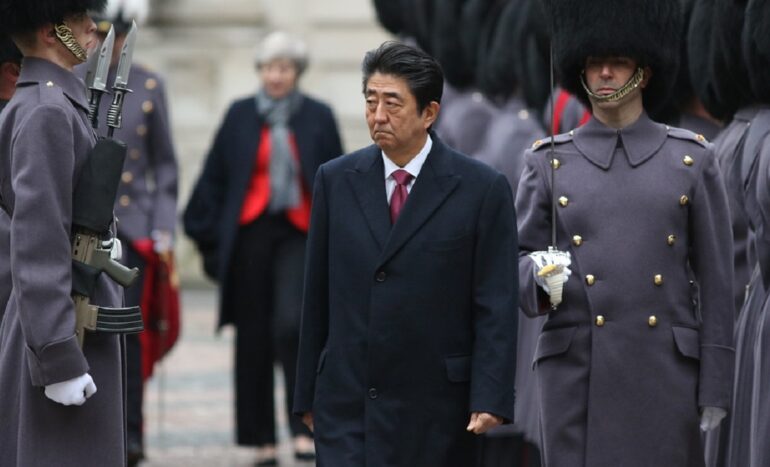 TOKYO, Japan—Former Japanese Prime Minister Shinzo Abe died Friday after being shot twice at a campaign event. The attack has shocked a country where gun violence is almost nonexistent.

Abe, 67, a Liberal Democrat, was Japan’s longest-serving prime minister. He was giving a speech in the city of Nara when he was shot in the chest around 11:30 a.m. Japan’s liberal democrats are conservatives.

According to the local fire department, Abe was in a state of “cardiopulmonary arrest.” Witnesses stated they heard a gunshot and saw Abe clinch his chest with blood spewing out.

The shooter was immediately apprehended. A homemade shotgun was also recovered at the scene.

Tetsuya Yamagishi, 41, was later identified to be the shooter. He is unemployed and served Japan’s Maritime Self-Defense Force—formerly known as the Imperial Japanese Navy—for three years.

Yamagishi confessed to the crime and added he harbored a grudge against a group he believed was connected to Abe.

Japanese authorities immediately raided Yamagishi’s residence and found several other homemade weapons from a mix of metal and wood. Police are trying to ascertain if he acted alone, reports NBC News.

Dr. Hidetada Fukushima, a professor of emergency medicine at the hospital, stated Abe had two gunshot wounds and no vital signs when he arrived less than an hour after the shooting. Multiple life-saving measures—including blood transfusions—were unsuccessful. Abe was officially pronounced dead at 4:03 a.m. ET.

Chinese Teen Hospitalized After Being Attacked and Then Arrested by NYPD

“I had been praying that he would somehow survive this, but our prayers were in vain, and to be receiving this news — I just have no words, only that I would like to offer my deepest condolences,” Kishida said, his eyes red and teary.

Abe, who stepped down in 2020, was campaigning for other members of the governing LDP.