KOREATOWN, Los Angeles—A Navy veteran who was waiting for a bus outside a Chipotle in Koreatown says he was sucker-punched by a stranger in a completely unprovoked attack captured on video.

The victim, who only wanted to be identified as “Leo,” told KTLA5 he was looking at his phone around 1:45 p.m. Tuesday, June 21, near the intersection of Wilshire Boulevard and Vermont Avenue when an African-American man who was seated on the bench near him got up and punched him in the face.

Leo stated he noticed the suspect looked anxious before being punched.

“I didn’t think too much of it and before you know it, I blacked out,” Leo said.

Footage shows the African-American male suspect taking a couple of steps toward Leo and then punching him in what appears to be an unprovoked attack.

Earlier today, and Asian male 32 yrs of age was waiting at the metro station on Vermont and Wilshire when a man walked up behind him and sucker punched him.

Jeffrey was waiting in the shade for the bus near Chipotle at Wilshire and Vermont, playing games on his phone. pic.twitter.com/i2mLlyGk0w

“It was a very scary feeling, not knowing what happened,” Leo stated. He decided to go back and get surveillance footage when he got out of the hospital. He doesn’t remember anything from the attack.

Apparently, a woman walked up to Leo after the attack and called 911.

“Initially I thought it was a hate crime because it was unprovoked … but I don’t know for sure,” he said.

Leo says he’s a Navy veteran who served overseas for five years and was honorably discharged in 2013, according to KTLA5.

Police are still searching for the attacker. 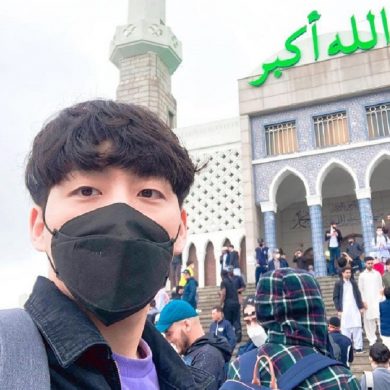