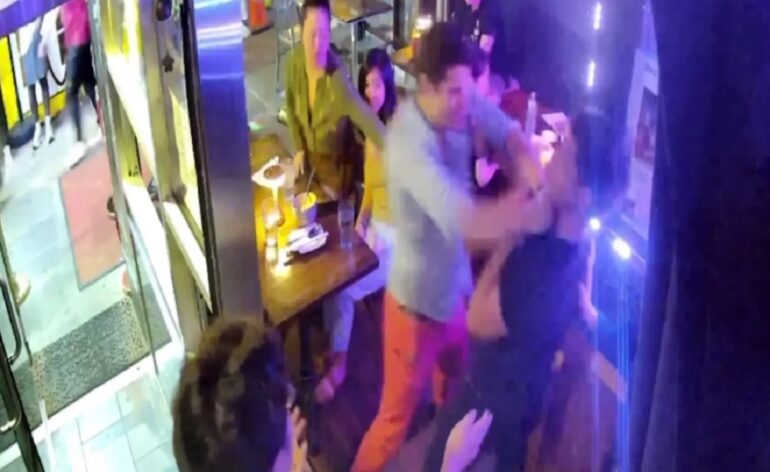 NEW YORK CITY—A director for Credit Suisse, a Swiss banking titan, was quietly fired after he allegedly assaulted a waiter during a bizarre brawl at a Koreatown restaurant.

The attack happened at Shanghai Mong, when media and info services director for Credit Suisse Roman Cambell, stumbled into the West 32nd Street eatery in the early hours of June 4 to use the bathroom, according to restaurant owner Jane Yi.

Yi told Cambell the bathroom was for customers only. Cambell allegedly became belligerent, refused to leave the restaurant, and began recording Yi with his smartphone, according to the New York Post.

“I treated him nicely, but then he became crazy,” Yi stated.

Surveillance footage on Instagram shows Cambell trying to take Yi’s phone, tossing a server’s checkbook to the ground, and wrestling with a waiter before smacking him across the head and then pulling his hair.

The waiter, Jose Morales, can be seen pushing Cambell toward the door before Cambell punches him in the face. Cambell’s punches left Morales bleeding from his forehead.

“When you see the video, there are 10 people walking in behind him,” said Yi’s husband, Tora. “They are my friends. They’re my customers, and they all left without ordering. Who wants to come into a restaurant when something like that is happening?”

According to sources from The Post, Cambell was fired from his job after employers saw the Instagram video.

“Credit Suisse is aware of the allegations circulating over social media, which occurred off property and are unrelated to Credit Suisse. Credit Suisse maintains and adheres to a policy condemning discrimination, bullying or violence of any kind,” the company said in a statement.

Cambell, a Columbia University grad, denied wrongdoing and claimed the series of beatdowns was because the waiter sprained his thumb. He has since removed his Linkedin profile.