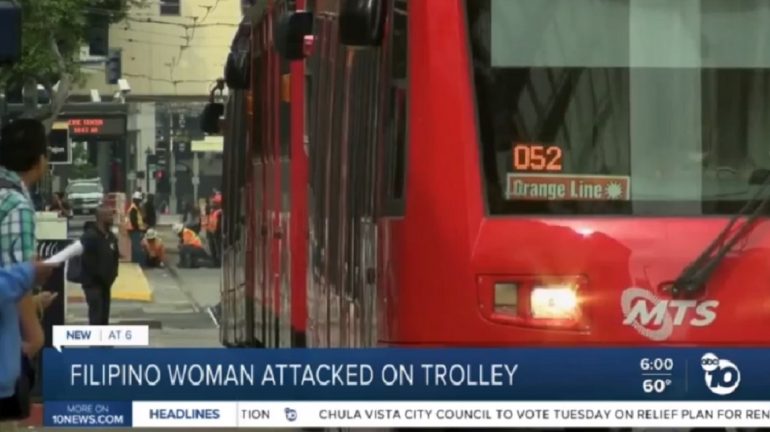 SAN DIEGO, California—An elderly Filipino woman was the victim of an unprovoked attack on a San Diego trolley, according to ABC 10News.

Apparently, a man seemingly punched the woman for no reason whatsoever. Witnesses helped her report it to the police. She was treated at a local hospital. It is unclear if any arrest has been made, reports ABC 10News.

“My first reaction is angry and then I was just sad for her,” said JoAnn Fields, a community advocate and director of the Filipino Resource Center.

Attacks on elderly Asian-Americans have been caught on video in recent weeks. 84-year-old Vicha Ratanapakdee, a native of Thailand, was on a morning walk in the San Francisco area when he was tackled. His head slammed the pavement. Ratanapakdee later died.

“To see this trend, awful trend, happening throughout the United States should put us on alert,” Fields said.

The group Stop AAPI Hate started tracking anti-Asian hate nationwide beginning in mid-March. It recorded more than 2,800 accounts by the end of 2020.

In San Diego County, the District Attorney’s office has three anti-Asian hate crime cases currently pen. There were none in 2018 and 2019.

A post shared by ASIANS WITH ATTITUDES (A.W.A) (@asianswithattitudes)

“It makes me very angry seeing how ignorant people are,” said Kent, a former Uber driver. He did not want to use his last name.

He no longer is a ride-share driver. “I stopped because of the pandemic and also I’m afraid something like this would happen again,” Kent said. “That incident was only verbal. What if I get attacked next time?”