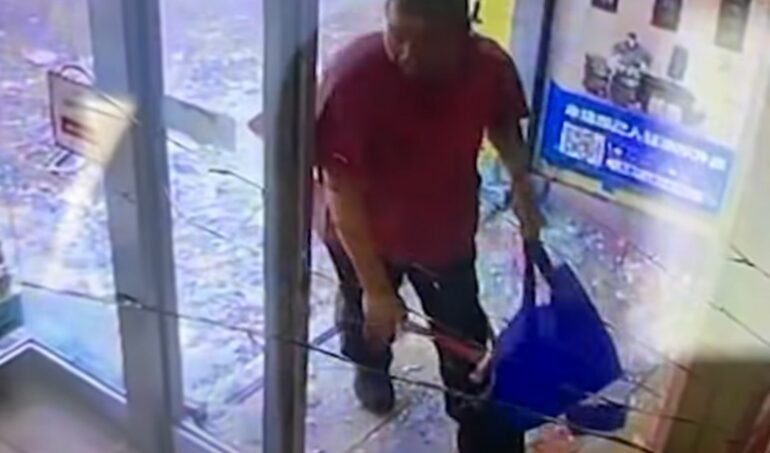 QUEENS, NY—A Chinese restaurant in Queens was vandalized Saturday afternoon by a regular customer who was kicked out earlier in the day for not wearing pants, says the owner.

The disgruntled man returned to 4 Choices & A Soup on Roosevelt Avenue in Flushing with a hammer at 4:40 p.m. and began smashing doors, windows, and glass around the food bar.

“He went to our store many times already today. I already asked my worker. My workers [said he had] been there before without any pants,” Jenny Xie, 48, told the New York Post in a phone interview.

“Just disgusting. So we told him to go out.”

“He had no underwear,” she added.

“It wasn’t the first the suspect had caused a commotion at the eatery,” Xie stated.

The suspect visits the restaurant multiple times a day, speaking to himself about his family in Chinese, Xie continued to explain.

“Everybody knows that he has a mental problem, so most of the time we … serve him right away,” she said. “We don’t wait too long to get him his food.”

The Chinese suspect was quickly arrested and charges against him are pending, according to the NYPD.

The restaurant owner told The Post she believes the suspect was off his meds and hoped he would get psychiatric help.

“We think if he takes his medicine he is very normal. He comes in and says ‘hello’ to us,” she said.

“We don’t want him to go to jail if he has mental problems because sometimes [mental patients] couldn’t control themselves.”

Xie told The Post she worries about the safety of her all-female staff and began closing 4 Choices & A Soup earlier because of the increased number of homeless and mentally ill people congregating around the area in recent years.

“Our restaurant is opened 18 years. We have never had this kind of situation. I’m so surprised he is Chinese and he is [an] old man,” Xie said.