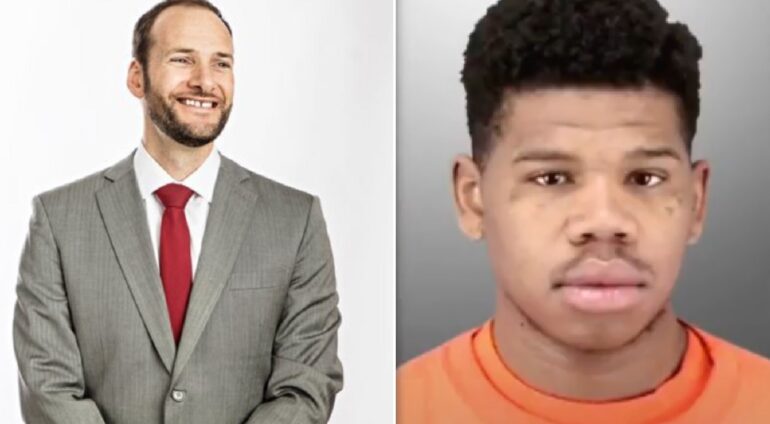 Gallon was sent to prison for four years for that particular puppy killing incident, according to Lou’s Newsletter.

Surveillance footage showed Gallon using his cellphone to coordinate with his second accomplice who entered the bus from the rear (without paying) and converged directly toward a 24-year-old Asian woman, surname Jung, who had her backpack firmly guarded between her legs because even she knew it was San Francisco.

Maxwell-Johnson grabbed Jung’s backpack and made a run for it through the rear MUNI bus door (1 of 85 reported property larcenies in San Francisco daily). Jung gave chase which then caused Gallon to approach and Sunday-punch her in the side of the face. The force of the punch sent Jung flying to the floor with a bloodied nose, reports Lou’s Newsletter.

Gallon and his accomplice robbed Jung of her passport, visa, iPad, laptop, and $500 cash. Asians are constantly targeted by criminal elements of the African-American community.

The SFPD immediately went to work, gathered evidence and video footage from MUNI, and arrested Gallon.

One problem, the final step required San Francisco District Attorney Chesa Boudin to do his job. At a preliminary hearing on November 12, 2021, the judge determined that there was sufficient evidence to support Gallon committed the robbery and assaulted Jung, according to Lou’s Newsletter.

Jung was a tourist and Boudin knew she wouldn’t be in town to protest the release of Gallon, which he did. When no one was looking, Boudin and the judge freed Gallon by enrolling him in an official-sounding drug diversion program called “Drug Court Track II.”

Both the DA and the judge circumvented diversion eligibility rules because violent criminals are not eligible for diversion programs and plus, Gallon was never arrested on drug charges.

According to Lou’s Newsletter, Gallon was seen last week partying it up in Las Vegas, which begs the question if Drug Court Track II is a remote drug diversion program now? Oh, and larcenies are up 24% over last year.