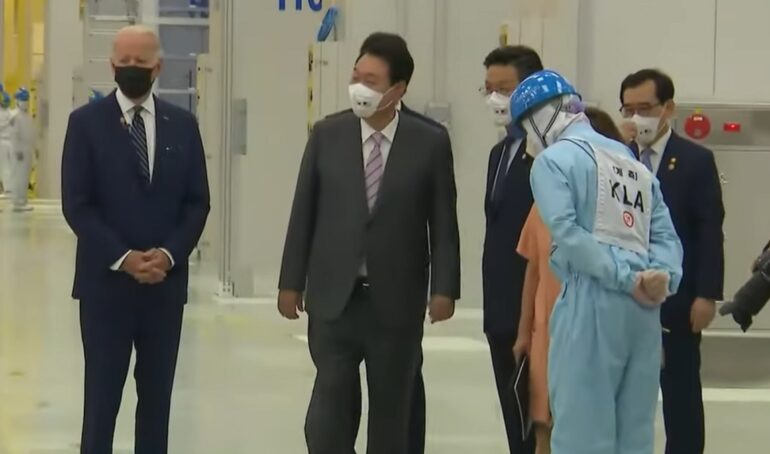 In a direct contradiction to Democrat policies and beliefs that diversity makes America strong, President Biden has been begging South Korean, Taiwanese, and Japanese companies to help get American companies back on track.

So far, the South Koreans have answered the call and they’re going to be making hundreds of billions of dollars in profits.

Within minutes of arriving in South Korea on May 20, President Biden traveled directly to Samsung’s Pyeongtaek factory, the world’s largest semiconductor factory.

“This factory is proof of that,” Biden said. “That gives both Korea and the United States a competitive edge in the global economy if we can keep our supply chains resilient, reliable, and secured.”

Biden personally met with multiple South Korean tech leaders and secured major investments and reaffirmed existing promises made. Samsung is honoring its promise to invest $17 billion to construct a new semiconductor plant in the U.S. back in May 2021, which brings Samsung’s total U.S. investments to $47 billion.

Samsung will also be investing $2.5 billion on an EV battery plant in Indiana for Europe’s Stellantis, which owns Chrysler, Dodge, and Jeep. The South Korean giant will help Chrysler develop its own lithium-ion batteries.

Shortly after Biden’s meeting with Hyundai, the Korean automobile giant, which also owns Kia Motors and recently surpassed General Motors and Ford in automobile production, promised to invest an additional $5 billion in the United States by 2025 to assist U.S. firms in advanced technology, reports Reuters.

Hyundai also announced they will invest $5.5 billion in Georgia to build EVs and battery facilities. The South Koreans, Chinese, and Japanese are currently locked in a tight race and currently control 95-percent of the world’s EV batteries.

South Korea’s SK Innovation is also honoring promises made back in 2021. SK will be investing $11.4 billion to build an electric F-150 assembly plant and three battery plants in the United States for Ford Motors, according to Reuters.

The bulk of General Motors’ new breakthroughs in battery and EV technology are coming from its South Korean technical center, which employs 3,200 people, including 2,300 engineers, according to Bloomberg.

LG has also promised the American government as well as General Motors to build a $2.1 billion battery factory in the United States to supply GM. The South Korean electronics giants recently caused Apple to raise the price of its upcoming iPhone 14 because of more expensive LG cameras.

Major South Korean companies are now embedded in nearly every major American tech and automobile company. President Biden is now moving on to Japan and Taiwan to secure more talent and corporate partnerships.