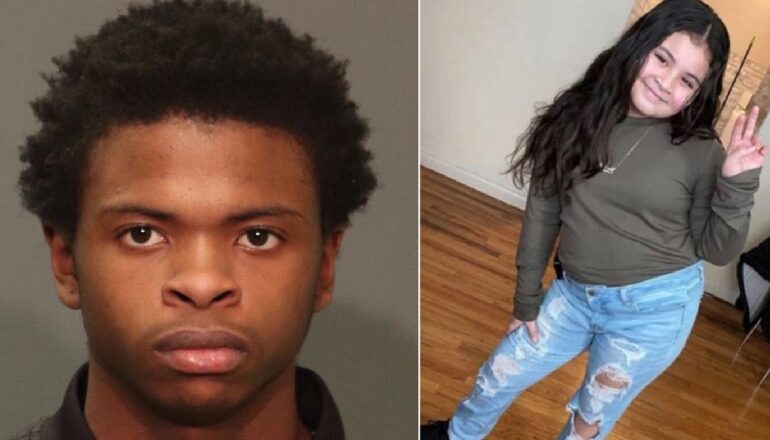 NEW YORK CITY—A 15-year-old is under arrest and another 18-year-old is currently on the run for the deadly shooting death of 11-year-old Kyhara Tay—who was killed by a stray bullet on Monday, May 16 in the Bronx.

Outrage over Tay’s death is growing by the hour as Police Commissioner Keechant Sewell announced a citywide manhunt for 18-year-old Omar Bojang, the alleged driver of a moped that was spotted at the scene of the shooting, reports CBS New York.

The NYPD says 15-year-old Matthew Godwin was riding on the back of the moped and pulled the trigger.

“They have devastated a family, while at the same time ending their own lives as they know them,” Sewell said.

Watch as @nycmayor & NYPD Executives update the media on a homicide investigation in the @nypd41pct https://t.co/cdoHzKe9Hb

Investigators alleged the two were on a moped Monday afternoon, chasing a 13-year-old boy along the sidewalk and shooting at him. However, they missed their intended target and struck 11-year-old Kyhara Tay half a block away in her stomach, killing her.

Godwin was arrested overnight in a hotel in the Bronx, but Bojang is still on the run, according to CBS News.

Godwin appeared in court on Friday and pleaded not guilty.

“His friends, his family, whoever knows where he is, he should turn himself in to justice,” Mayor Eric Adams said.

CBS News reports, that in the Bronx alone, sixteen children age 16 and under have been shot this year.