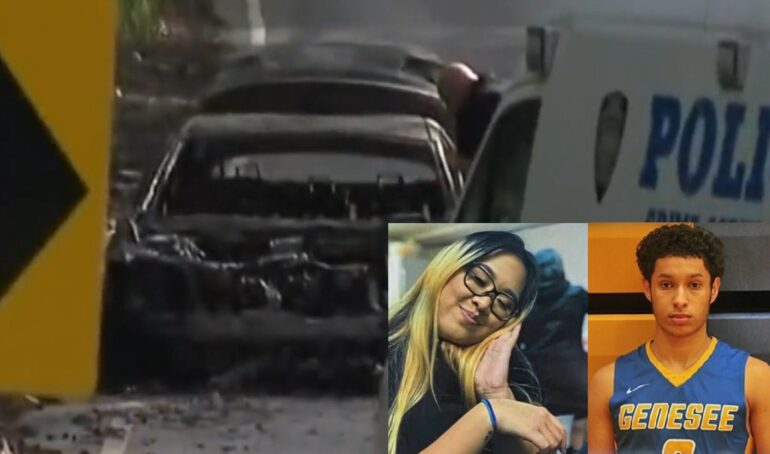 BRONX, New York—A couple found shot to death and burned beyond all recognition in a car at a Bronx park were victims of a gang war sparked by a stolen purse.

The series of retaliatory events and ultimate murders started when Nikki Huang complained to her gangster friend that a rival click mugged her last Sunday, May 15, stealing her purse, according to The New York Post.

Nikki’s boyfriend, ex-college hoopster 22-year-old Jesse Parrilla—who was also shot dead and burned—was not part of the rival gang war between the Up the Hill and the Down the Hill gangs, but ended up getting killed because he spent time with Nikki.

Parrilla’s mother, Michelle Morales, who owned the car that the pair was killed in, told The Post her son knew Huang since middle school.

“He was a good-hearted person just helping a friend out with a ride. I don’t think he was aware of anything. He had no idea what was going on because he would never put himself in a situation like that.

“I’m so angry and devastated and hurt that my son was taken away from me just like that. The last words he said to me when I was finally able to talk to him was, ‘I love you.’”

The badly burnt bodies of the young couple were found in the charred car around 4:30 a.m. Monday at the Split Rock Golf Course in the Bronx.

Detectives believe the tragic series of events started when 23-year-old Huang was robbed near a housing project on the Lower East Side, reports The Post.

Huang’s assailants were allegedly members of the Down the Hill gang. Instead of going to the police, Huang decided to tell her friends in the rival Up the Hill gang.

According to police, the two gangs are not affiliated with any national gangs and have been locked in turf wars for years stretching as far off as San Francisco, New York, and Paterson, New Jersey.

Payback was immediate. At 11:18 p.m., a 39-year-old gang member of Down the Hill gang, Brandon Atkinson, was gunned down in Alphabet City, however, authorities don’t know if Atkinson actually robbed Huang. He was taken to Bellevue Hospital where he later succumbed to his injuries.

Down the Hill gang members held a gun to Huang’s head and forced her to betray her friend. They made her call him and get him to leave his house in Queens, so they could ambush him.

Huang’s friend, 27-year-old Maurice Sullivan was taking out his trash in Maspeth when a dark-colored vehicle rolled up around 2:20 a.m. and shot Sullivan in the left side of his face.

Detective believe a short time after Huang called Sullivan, Down the Hill gang members took her and Parrilla to the Bronx golf course and executed them, and set the car on fire.

Huang was 23-years-old and worked at Wa Lung Kitchen on the Lower East Side owned by her mother, who also owns Nails by Nikki.

No further detail is available. Detectives are now trying to identify those responsible for the kidnapping and murder of the couple.