LOS ANGELES, California—Superior Court Judge George Lomeli made his ruling after Deputy District Attorney John McKinney explained there was insufficient evidence to prove reckless indifference to human life on part of the defendant Jonathan Del Carmen, which would be required to let the conviction stand, according to NBC 4.

Saying he had no choice under a new narrower felony murder rule, a judge Monday redesignated the conviction against the getaway driver involved in the beating death of a USC graduate student to attempted robbery from second-degree murder and sentenced him to time served.

Del Carmen was 19-years-old at the time of the crime, he was one of four young people convicted in connection with the attack in which Xinran Ji, an electrical engineering student from China, was beaten with a wrench and a bat, reported NBC 4.

While there was clear evidence that Del Carmen fully participated in the plan to rob Ji and helped cut off the victim’s escape, when the driver saw the others beating the USC student, he pulled the car away, McKinney told the court. Del Carmen also explicitly told the others that he didn’t want to participate in the robbery that came next, according to the prosecutor, according to NBC 4.

Under the law in place at the time of the convictions, defendants not directly involved in a killing could be charged with first-degree murder under a doctrine of natural and probable consequences. However, under Senate Bill 1437, signed into law in 2018 by then-Gov. Jerry Brown, only direct participants or those who can be shown to act with reckless indifference can face such a charge.

“The law is the law,” the prosecutor said.

McKinney said the prosecution had reviewed many other relevant cases, and it was clear that based on the letter of the law, Del Carmen “is entitled to relief … entitled to have his murder plea vacated.”

“Even though the court may be reluctant to do it … the court has no discretion but to grant it,” Lomeli said.

A representative for Ji’s family told the court it had been hard enough for them to originally make peace with a plea of second- rather than first-degree murder from Del Carmen.

“This is very hard for the family to accept,” the spokeswoman said. “While the legislature is making law … they should always remember the victims in the process.”

Though it has been nearly seven years since his killing, Ji’s family still struggles to cope, but the idea that justice had been rendered helped them to move on, the representative said.

“On behalf of the family … we believe the legislation is unconstitutional,” she told the court.

Repeating that he had no choice, Lomeli handed down a sentence of three years, the highest he could impose for an attempted robbery. He noted that Del Carmen had already served that entire term in prison.

In a September 2020 appellate court opinion upholding the conviction of co-defendant Alejandra Guerrero, the justices noted that Guerrero — armed with a wrench — got out of the car to confont Ji and that she saw co-defendant Alberto Ochoa “violently hit Ji with the bat” and then she chased him down and hit him with the wrench while another young man, Andrew Garcia, beat him in the head with a baseball bat, according to NBC 4.

“The group left the scene as Ji lay covered in blood with a fractured skull,” the justices noted in that 28-page ruling. “Ji managed to get up and return to his nearby apartment, where he died a short time later from his head wounds. The attack was captured on surveillance cameras and played for the jury.”

The appellate panel noted that “despite all this violence,” it was only when Del Carmen pulled the car away that “Guerrero stopped her attack on Ji and returned to the car, not to go home or to call for help, but to commit additional robberies, again armed with a deadly weapon.”

After the attack on the 24-year-old electrical engineering student, the group drove to Dockweiler Beach, where three of the defendants encountered a man and woman and demanded the couple’s possessions, the panel noted. They were arrested soon afterward.

Guerrero and Ochoa were both sentenced to life in prison without the possibility of parole, but appellate court panels ordered Lomeli to consider “youth-related mitigating factors” in resentencing. In separate hearings last month, Lomeli subsequently let both lifetime sentences stand.

The conviction of the final defendant — Andrew Garcia — was upheld in a May 2019 ruling, with the California Supreme Court refusing to hear the case against him last August. He was 18 at the time of the crime, reported NBC 4.

Ji’s killing occurred two years after two other USC graduate students from China were shot to death during an April 2012 robbery as they sat in a car that was double-parked on a street near the USC campus.

Two men — Javier Bolden and Bryan Barnes — were convicted and sentenced to life in prison without the possibility of parole for the killings of Ying Wu and Ming Qu, who were both 23. 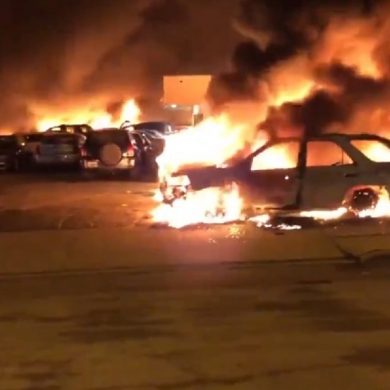