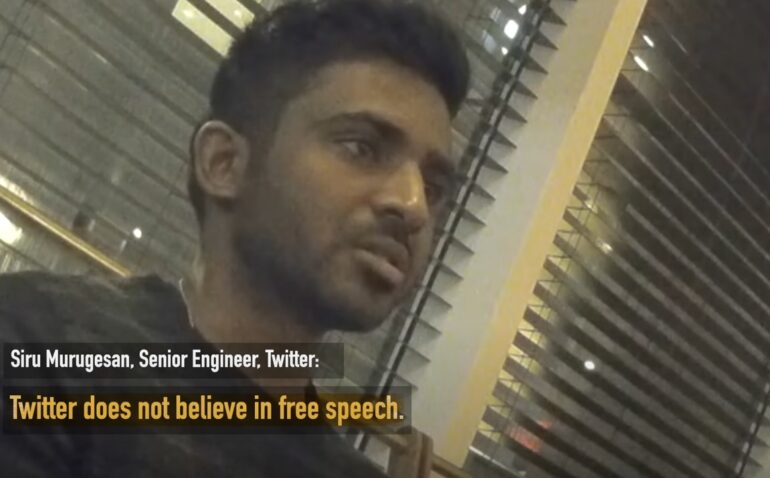 SAN FRANCISCO, California—A senior Twitter engineer was secretly recorded admitting that the social media giant is “censoring the right” and that his co-workers are “Commie as f**k.”

“Twitter does not believe in free speech,” senior Twitter engineer Siru Murugesan stated in a series of hidden-camera clips released late Monday, May 16, by Project Veritas.

“Elon [Musk] believes in free speech,” added Murugesan. The Twitter engineer also claimed many of his colleagues “hate” what might happen if Musk’s on-hold $44 billion takeover goes through.

“Our jobs are at stake — he’s a capitalist, and we weren’t really operating as capitalists, more like very socialist,” he continued. “We’re all like Commie as f–k.”

“‘I think it’s just like the environment like you’re there and you become like this Commie — they call it ‘Commifornia,’” he said of staffers’ nickname for woke California.

“I don’t know [if] the two parties can truly co-exist on one platform,” he suggested.

Murugesan also admitted right-wingers are more likely to tolerate abusive messages while left-wingers refuse to take the abuse and quit the site.

“We’re actually censoring the right, and not the left,” he said, later adding: “It’s true. There is bias. It is what it is today.”

The senior Twitter engineer went on to explain conservative voices were returning to the social media site in droves in light of Musk’s intended takeover and staffers have been “stress eating” and “worried for our jobs” after a prolonged period where “essentially everyone gets to do whatever they want.”

“If you’re not feeling it, you can take a few days off,” Murugesan said. “People have taken months off.”

“I basically went to work like four hours a week last quarter,” he added. “And it’s just how it works in our company.”