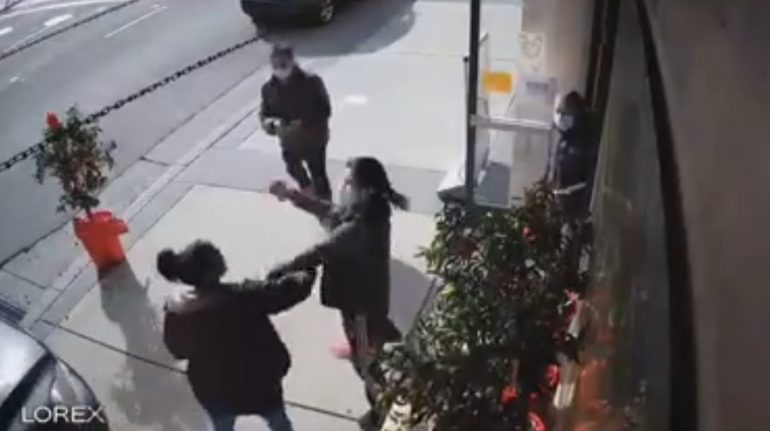 The Oakland Chinatown Chamber of Commerce president told ABC’s Dion Lim he’s keeping track of at least 20 robberies and assaults in Chinatown in the past two weeks alone.  He also indicated things will most likely get worse as Lunar New Year approaches.

“He says (and I know this from experience as well) older Asian Americans are afraid to speak out so he’s organizing a press conference to empower them and get the story out this week. He’s going to ask the city for a partnership so there are more security cameras and resources to protect businesses,” stated Dion Lim.

Multiple CCTV footage over the weekend captured acts of violence as a male African-American suspect walked into a Chinatown market and snatched cash right off an elderly Asian woman’s hand.

Footage captured Saturday, January 30, 2021, showed three African-American females trying to steal plants from an Asian-owned business. The incident led to a full-physical confrontation that nearly resulted in the business owner being run over by a car.

It doesn’t stop there. Police in San Francisco arrested a 19-year-old African-American male named Antoine Watson on Saturday, January 30, on suspicion of murder for an attack last week on an 84-year-old Asian man in the city’s Anza Vista neighborhood, according to Fox KTVU.

Watson was booked on suspicion of murder, elder abuse, and assault with a deadly weapon. Police also arrested 20-year-old Maylasia Goo on suspicion of being an accessory after the fact.

The vicious attack happened around 8:30 pm Thursday, January 28, when officers found the victim lying on the sidewalk at Anzavista and Fortuna avenues, according to Fox KTVU.

Paramedics rushed the victim to a hospital where he later succumbed to his injuries two days later. Initial investigation showed Watson randomly ran up to the victim and shoved him, causing him to hit the pavement. The suspect then fled with a female associate.

And just to finish things off, the San Francisco Chronicle reports Lowell High School, the most elite high school in San Francisco, which is 61% Asian, announced they will permanently switch to a lottery admission system under a fast-track proposal. Asian students outperforming all other races in standardized tests is a form of “White supremacy,” and must be addressed.

The Progressive Utopia is almost complete.