Dr. John Cheng Hailed a Hero for Charging At Gunman 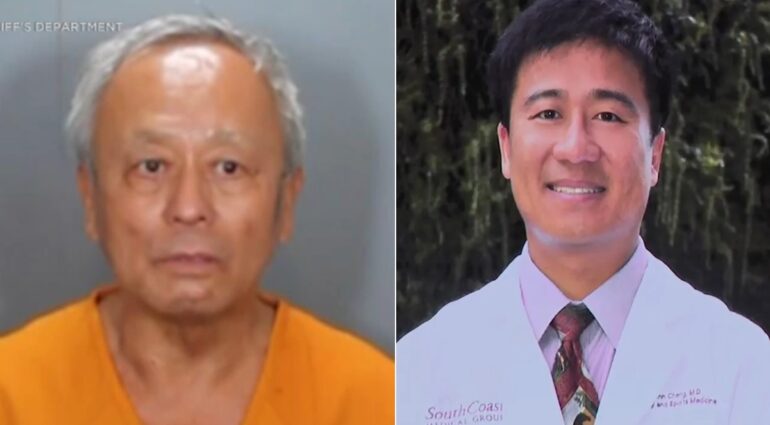 LAGUNA WOODS, California—The man who was killed in Sunday’s shooting at Geneva Presbyterian Church—a Taiwanese congregation—was 52-year-old Dr. John Cheng of Laguna Niguel. He was a highly-regarded sports physician who heroically tackled the gunman before being fatally shot.

The suspect, identified as 68-year-old David Chou of Las Vegas, a U.S. citizen from China, was motivated by anger over political tensions between China and Taiwan, reports ABC7.

However, according to Focus Taiwan, David Wenwei Chou was born in Taiwan in 1953, which means he’s Taiwanese, not Chinese.

That anger and hatred of Taiwan pushed Chou to drive to Southern California from Las Vegas. He lived alone and worked in security.

The Orange County Sheriff’s Office stated they received a call of gunfire at the Geneva Presbyterian Church in Laguna Woods shortly before 1:30 p.m, Sunday, May 15. Police said the shooting occurred during a lunch banquet following morning service with about 30 to 40 people in attendance.

Dr. Cheng tackled Chou, which allowed other parishioners to tackle and subdue Chou with extension cords, but not before being fatally shot in the process.

“Literally the meeting of good versus evil, between Dr. Cheng and the suspect in this case,” Orange County Sheriff Don Barnes said.

“Without the actions of Dr. Cheng, it is no doubt that there would be numerous additional victims in this crime,” Barnes continued.

“I don’t think that was a spontaneous act,” he said. “I think he had thought this through in his mind, if something were to happen, ‘what would I do?’ And he acted on it. He saved the lives of probably upwards of dozens of people the way this individual was prepared.”

Dr. Cheng specialized in sports medicine with the South Coast Medical Group. He was reportedly not a regular churchgoer but was accompanying his elderly mother to attend the Irvine Taiwanese church, which uses the facility for its services and luncheon.

According to CBS News, Cheng also served as a volunteer team physician for Aliso Niguel High School’s football program, provided physical clearances for student-athletes, and made generous donations to the school’s program.

“Evil was in that church yesterday,” stated Orange County District Attorney Todd Spitzer. “He sacrificed himself so that others could live.”

Dr. Cheng leaves behind a wife and two children.

Taiwan—formally called Formosa—is an island off the coast of China. It has belonged to the ruling dynasty or official government of China for nearly a thousand years, although the Chinese always treated the island as a distant cousin with no type of administration.

The Dutch attempted to colonize the island and held it for 38 years, however, they were defeated by the Qing Dynasty in 1662, who then re-annexed the island.

The Imperial Japanese Empire annexed Taiwan in 1895 after defeating Chinese forces. The island was returned to the Republic of China by the Allies after Japan’s surrender in 1945. However, the Republic of China no longer became the legitimate government of China after losing to the communists in 1949, and soon remaining republic forces led by General Chiang Kai-shek retreated to Taiwan.

The United States did not agree with the outcome of China’s civil war and decided to block any attempts of the newly-formed People’s Republic of China from unifying all of China under a single government. The United Nations does not recognize Taiwan as a country as a result. Taiwan—on paper—is a renegade state.

The People’s Republic of China believe Taiwan was on the verge of complete defeat when they retreated to the island and argue an outside force not indigenous to the region had interfered with internal Chinese affairs. China points out they never attacked Pearl Harbor or launched any sneak attack to warrant interference from the United States nor were they involved in European or Western civil wars.

The Chinese also point out that the island of Taiwan was never in any part or any aspect of American history since her founding in 1776 and Taiwan’s continued protection is part of America’s Manifest Destiny and a never-ending Monroe Doctrine, both “imperialistic” beliefs, according to the Global Times.