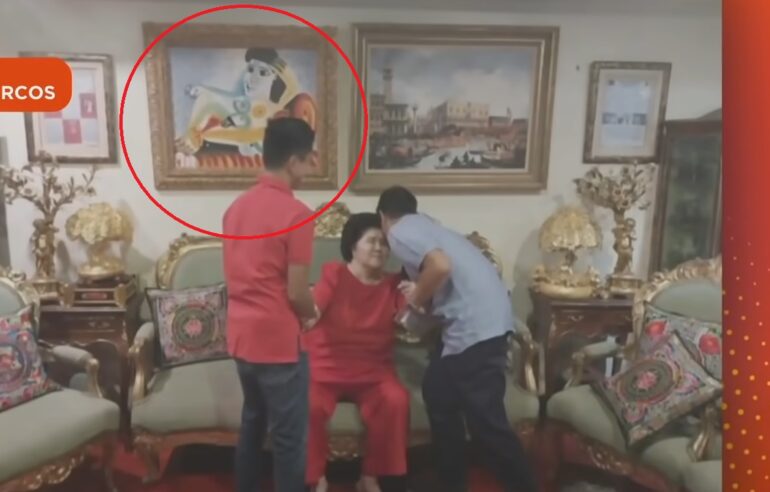 A missing Pablo Picasso painting called the “Reclining Woman VI” was spotted at the home of the Philippines’ controversial former first lady—as she celebrated her son’s presidential victory.

Imelda Marcos—widow of late Philippine dictator Ferdinand Marcos—was filmed hugging her son, Ferdinand “Bongbong” Marcos Jr., in footage that aired this week. The footage showed the long-lost painting in the background of her luxurious apartment.

During Ferdinand Marcos’s rule from 1965 to 1986, he committed countless human-rights abuses, including arrest, torture, and killing of his opponent, and using his presidency to seize as much as $10 billion USD in ill-gotten wealth, reports the New York Post.

Much of that seized wealth, including millions of dollars worth of art, has never been recovered.

Picasso’s Reclining Woman VI first appeared in a 2019 documentary about the Marcos family called “The Kingmaker.” The abstract painting then went missing again as the Philippines’ Presidential Commission on Good Government task force hunted for it, according to PCGG Chairman Andy Bautista.

In the documentary, the former first lady openly flaunted the painting, along with other rare antiquities and artworks in her collection, reports The Post.

The Philippines is a former Spanish, American, and Japanese colony. The United States granted the Philippines independence on July 4, 1946, after retaking the island nation back from Japan in 1944.