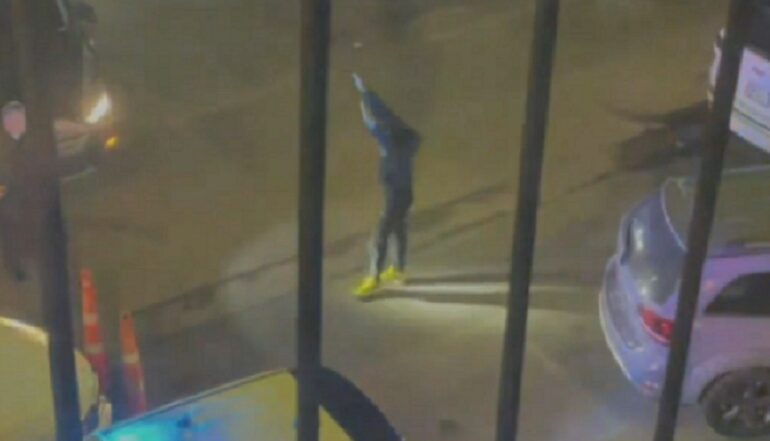 BOSTON—Multiple shots were fired, three people were arrested and two Boston police officers were taken to the hospital after an incident in Chinatown early Monday morning.

According to CBS4, police were called to Tyler Street around 2 a.m. for a report of a person with a gun in an SUV.

When responding officers approached the SUV, the vehicle accelerated and hit two parked cars. Both police officers opened fire, however, no one was hit. It’s not clear if any of the three occupants of the SUV returned fire or fired first.

Adam Grobart recorded the incident from his apartment and shared the footage with CBS4.

“Looked out my window, saw a really big police presence, tons of cops outside, a lot of screaming. A lot of bystanders kind of running, trying to find somewhere to hide,” he told reporters.

Video footage later showed three men getting out of the SUV one at a time with their hands up as police drew their guns before arresting the suspects.

“This has happened in Chinatown on this street before so I was kind of confused why this is a pattern here,” Grobart said. “But then I was really just hoping that all officers and everyone was going to be safe. “

The three men who were arrested were identified as Ahsan Arty, Alexander DeLarosa, and Devrae Burns. They’re expected to be arraigned in Boston Municipal Court Monday.

Two police officers were taken to the hospital and were treated for minor injuries. They were later released.