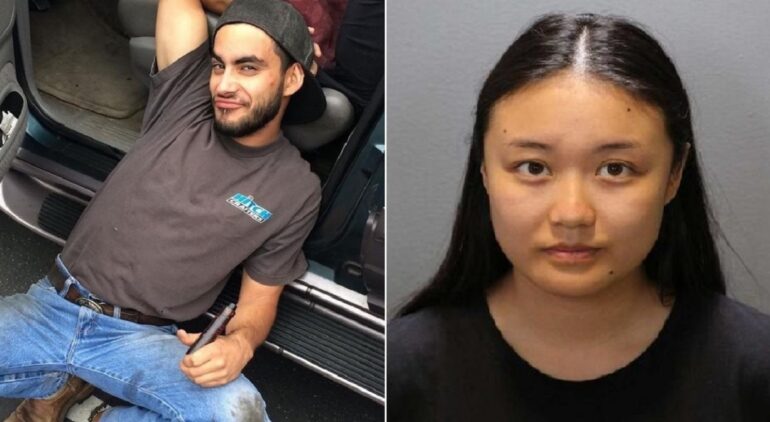 COSTA MESA, California—A judge on Wednesday ordered a Costa Mesa couple to stand trial in the shooting death of a 6-year-old boy during a road rage incident on the 55 Freeway last May.

25-year-old Marcus Anthony Eriz has been charged with one felony count of murder, one felony count of shooting into an occupied vehicle, and one felony enhancement of the personal discharge of a firearm causing great bodily injury and death, the Orange County District Attorney’s Office said in a statement.

Eriz faces a maximum sentence of 40 years to life in state prison if convicted on all counts, reports KTLA5.

His girlfriend, 23-year-old Wynne Lee, was the driver of the vehicle. Lee has been charged with one felony count of accessory after the fact and one misdemeanor count of having a concealed firearm in a vehicle. She faces a maximum sentence of three years in state prison and one year in the Orange County Jail if convicted on all charges, according to KTLA5.

Both Eriz and Lee pleaded not guilty last June.

Eriz is currently being held without bail and Lee was released on electronic monitoring. Both Eriz and Lee are scheduled to be arraigned on April 12 at the Central Justice Center in Santa Ana.

The horrific shooting happened just after 8 a.m. on May 21, 2021. 6-year-old Aiden Leos was shot and killed while in the back seat of his mother’s car while on the 55 freeway near Chapman Avenue, reports KTLA5.

Leos and his mother were on their way to kindergarten at Calvary Chapel in Yorba Linda. Aiden’s mother, Joanna Cloonan, was angry that a speeding vehicle cut her off, so she sped up to flip the car off.

That’s when Eriz is accused of shooting at Joanna’s vehicle, killing 6-year-old Aiden.

The California Highway Patrol soon launched an intense two-week manhunt and even offered a $500,000 reward. Eriz and Lee were eventually arrested on June 6, 2021.

“A monster with a gun murdered a little boy on his way to kindergarten – because he was cut off on the freeway,” O.C. District Attorney Todd Spitzer said in a written statement Wednesday. “The callousness of this crime is unspeakable, but the fact that this couple continued to hide out in plain sight knowing full well they killed a 6-year-old child while Aiden’s grieving parents pleaded with the killers to come forward is [unforgivable].”