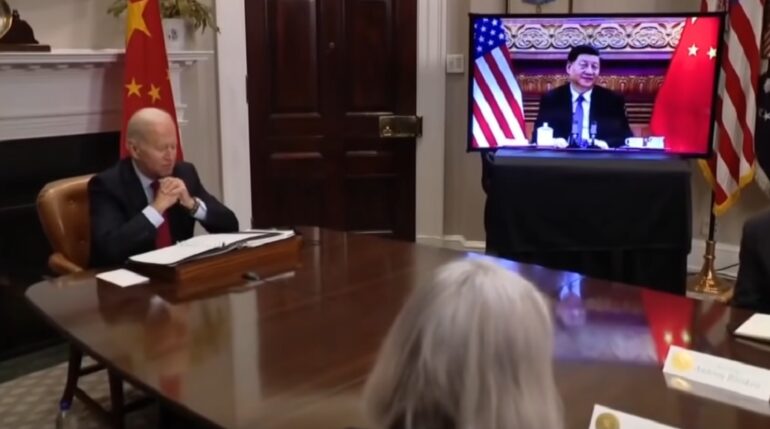 WASHINGTON, D.C.—Chinese President Xi Jinping rejected President Biden’s request Friday to join NATO-led sanctions against the Russian Federation to punish its invasion of Ukraine, however, hinted at a possible request to hold back weapons transfers.

The two-hour call between Xi and Biden ended at 10:53 a.m. EST and Beijing quickly issued a readout pointedly rejecting sanctions as a strategy to end the 23-day-old invasion of Ukraine, reports the New York Post.

“Sweeping and indiscriminate sanctions would only make the people suffer,” the Chinese statement said. “If further escalated, they could trigger serious crises in global economy and trade, finance, energy, food, and industrial and supply chains, crippling the already languishing world economy and causing irrevocable losses. The more complex the situation, the greater the need to remain cool-headed and rational.”

Beijing’s statement also said that “China has been doing its best for peace and will continue to play a constructive role” — hinting at, but not stating outright a willingness to withhold weapons from Russia, according to The Post.

India, the largest democracy in the world and former British colony, also refuses to “obey” NATO-led sanctions against Russia. The state-run Indian Oil Corp, bought 3 million barrels of crude oil from Russia earlier this week, resisting strong Western demands India obey Western orders as they did for hundreds of years.

India further stated they will not impose sanctions against buying oil and will be looking to purchase even more oil from Russia as well as other resources, regardless of what the United States or especially what the United Kingdom says.

India saw itself experiencing sanctions from the United States in 1998 after conducting multiple underground nuclear tests.

India imports 85% of its oil and its demand is projected to jump 8.2% this year to 5.15 million barrels per day as its economy recovers from the pandemic. Russia offered a 20% discount to India and India accepted, reports ABC News.

Xi warned US politicians that “[m]ishandling of the Taiwan question will have a disruptive impact on the bilateral ties.”

Many pro-Chinese commenters pointed out if the West can supply Taiwan, it’s only fair China can supply Russia with weapons and financial aid; it’s a two-way street. An “’eye for an eye,’ as the Westerners say,” one Chinese commenter wrote.