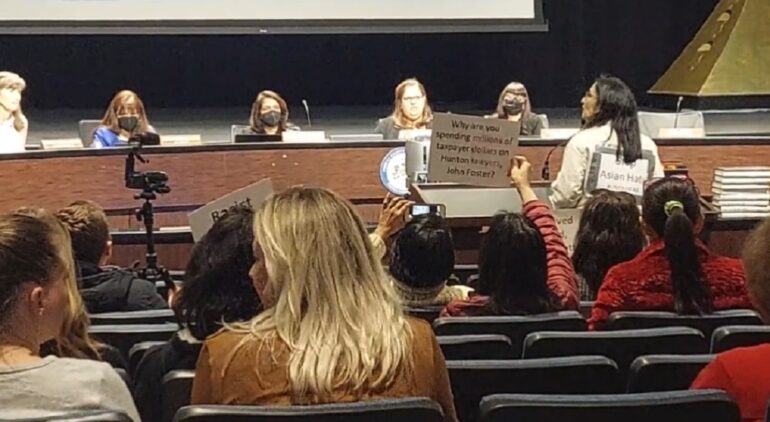 FAIRFAX COUNTY, Virginia—The entire Fairfax County school board fled their own meeting on Thursday, March 10, as Asian parents chanted and screamed that they were “racist” and “evil” following a federal judge’s ruling that the board broke the law by reducing the number of Asian students at its magnet math and science school, and the board’s vow to appeal the ruling, reports The Daily Wire.

The school board vowed to stop merit-based admissions, appeal the federal judge’s ruling, and continue to reduce Asian students from attending America’s best high school—the reason the high school is the best in America is because it was 70% Asian.

The school board’s high-priced law firm, Hunton Andrews Kurth, is the successor to Hunton & Williams, the law firm that fought to preserve segregation in cases that ultimately became Brown vs. Board, the case the Supreme Court struck down as school segregation, according to The Daily Wire.

African-American students require Asian students to intentionally “take a step back” for them to artificially compete in academics.

Thomas Jefferson School for Science and Technology once had the highest math scores in the United States. Asian students dominated in the math test used for admissions. However, that dominance was determined to be not “equitable.”

Indian-born Asra Nomani and mother of a TJ student who was directly involved in the successful lawsuit spoke at Thursday’s meeting and told the school board “For the last two years you have been trying to make us invisible, but a federal judge has ruled that in fact you are going to go down in history just like I told you you would, just like the school board in Brown vs. Board.”

“You are the new face of racism,” Nomani said.

School board members arrogantly smirked at her in response.

Nomani approached the podium with a stack of copies of Race To The Bottom, a new book by investigative reporter Luke Rosiak, which highlights anti-merit, anti-Asian school policies and chronicles the Fairfax school board in particular, according to The Daily Wire.

"You are the new face of racism. I have here a copy of a book for each of you: Race to the Bottom. You are all in this book… I hope you read them from cover to cover and see yourselves in the pages of history–as failures," she told the all-Democrat board as security encroached pic.twitter.com/4GjfWs0rcp

A security guard quickly approached Nomani and the crowd of parents began shouting “Racist, racist, racist” at the school board.

The board chair abruptly declared “I’d like the board to take a recess” and members immediately vacated their seats and rushed out of the room while Asian parents screamed “Racist!” and “Evil!” multiple times.

“You have caused us pain. There are people here who have survived the Cultural Revolution. Yuyan stood in Tiananmen Square… I am a woman of color but you don’t care, do you. You’ll bring all of the white security guards… We, the Asians, don’t matter to you… We’re supposed to be the good, obedient Asians, that’s what you expect of us, don’t you. Especially women,” Nomani continued.