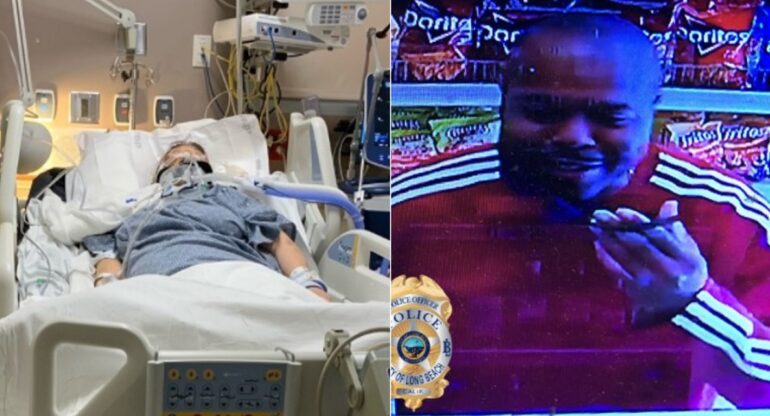 LONG BEACH, California—Authorities are searching for an African-American man who stabbed the owner of Frank’s Liquor in the neck multiple times Sunday morning on January 30, 2022.

The attack left 65-year-old Yongja Lee paralyzed from the neck down and unable to speak. She and her husband were on the verge of retirement, according to the LA Times.

According to the Long Beach Police Department, Lee’s attacker is described as an African-American male, about 6’2” tall, weighing about 200 pounds, with brown eyes. The suspect fled the scene toward the 900 block of East Broadway.

🚨WANTED SUSPECT: #LBPD is seeking the public’s help identifying a suspect who stabbed & injured a woman inside of a liquor store on Jan. 30, 2022 in the 900 block of E Broadway.

Surveillance footage from Frank’s Liquor showed the suspect walk up to Lee, who had her hands “raised protectively.” After a short exchange, the assailant stabbed Lee at the base of her neck.

Sadly, attacks like these are not uncommon in downtown Long Beach, which experiences a higher rate of violence because of the African-American demographic.

“We’re investigating the crime like we do all the others,” said Richard Mejia, a spokesman for the Long Beach Police Department. Detectives are not currently treating it as a hate crime, he added.

The recent wave of anti-Asian violence and this year being the 30th anniversary of the L.A. riots won’t be helping things. African-Americans specifically targeted the Korean-American community and many in the Asian community have not forgotten or forgiven.

Kevin Voravong—who lives in the same building Frank’s Liquor occupies—started a GoFundMe page in support of Lee. The page has currently raised over $35,000 with a $50,000 goal.

Voravang stated Lee’s kindness to him over the years inspired him to help. He lived in the building since the Lees moved in and remembers how generous the couple has been to him, reports the Long Beach Business Journal.

“She would be cooking dinner, and me and my friend Andrew would go downstairs to get snacks and a beer, and she would say ‘Wait, wait,’ and go to the back,” Voravong recalled. “She would go back there for two minutes and would come back out with the most delicious Korean food. Rice, cabbage, kimchi, pork. It’s just amazing.”

Voravang continued to explain the couple puts in long hours at the store and works hard to keep the establishment running smoothly.

“They open that shop at 10 a.m. and then would be there until 10, 10:30 at night. So they are there like clockwork, working so hard just trying to cover their rent,” Voravong said.

“We are crushed that this happened to her. It’s just unbelievable.”

LBPD is requesting anyone with information about the stabbing to contact the department’s Violent Crimes Detail at 562-570-7250 or submit an anonymous tip to LA Crime Stoppers at 800-222-8477 or by visiting lacrimestoppers.org.