The Illegal Annexation of Hawaii by the United States 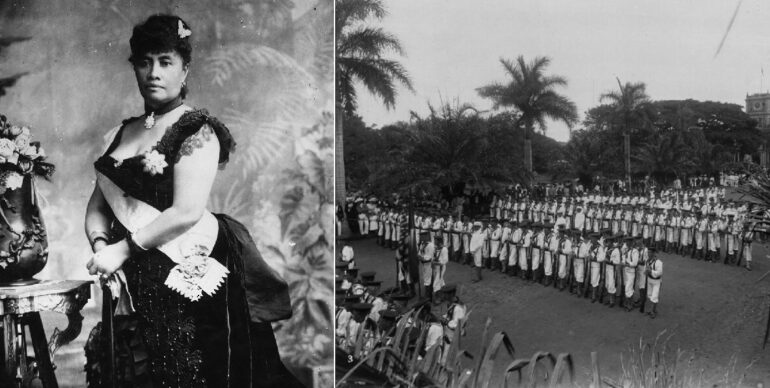 HAWAII—The first known settlers of the Hawaiian Islands were Asiatic Polynesian voyagers who arrived sometime in the 8th century. In the early 18th century the first American traders came to Hawaii to exploit the islands’ sandalwood, which was extremely valued in China at the time.

In the 1830s, the sugar industry was introduced to Hawaii and would later be well established by the mid-19th century. American missionaries and planters dramatically changed Hawaiian political, cultural, and economic life, according to History.

By 1840 a new constitutional monarchy was established, stripping Hawaiian King Kalakaua of much of his authority.

Within the next 40 years, Hawaii entered into a number of political and economic treaties with the United States and in 1887, a U.S. naval base was established at Pearl Harbor as part of the new Hawaiian constitution.

American sugar planters gained a tremendous amount of power as sugar exports to the United States grew exponentially. In 1891, Liliuokalani, the sister of the late King Kalakaua, ascended to the Hawaiian throne and refused to recognize the 1887 constitution, and decided to replace it with one that increased her personal authority.

In January 1893, a revolutionary “Committee of Safety” led by Sanford B. Dole, staged a coup against Queen Liliuokalani with a contingent of 300 U.S. Marines from the American cruiser Boston to “protect American lives.”

Queen Liliuokalani was arrested by American forces and stripped of her royal title and forced to give up any future claims to the Hawaiian throne under duress. She was then put on military trial in her own throne room. She was convicted, fined $5,000, stripped of her civil rights for “treason,” and sentenced to five years in prison with hard labor.

On February 1, 1893, U.S. minister to Hawaii, John L. Stevens proclaimed Hawaii a U.S. protectorate with Dole submitting a treaty of annexation to the U.S. Senate.

Queen Liliuokalani’s five-year hard labor prison sentence was reduced to imprisonment in an upstairs bedroom of her own palace for eight months. She was given a full pardon, once the United States secured Hawaii as a territory.

President Grover Cleveland sent a new U.S. minister to Hawaii to restore Queen Liliuokalani to the throne under the old 1887 constitution, but Dole refused to step aside and proclaimed his new government the independent Republic of Hawaii, according to History.

President Cleveland refused to use force to overthrow Dole and let the situation play out. Cleveland’s successor, President William McKinley, negotiated a treaty with the Republic of Hawaii in 1897.

In 1898, the Spanish-American War broke out and the strategic use of Pearl Harbor and a possible conquest of the Philippines from the Spanish convinced Congress to approve formal annexation. Two years later, Hawaii formally became a U.S. territory.

In 1959, Hawaii entered the United States as the 50th state.

Queen Liliuokalani was unsuccessful with every lawsuit she brought upon the United States government under the Fifth Amendment, seeking to return Hawaiian Crown Lands. However, in 1911, she was given a lifetime pension of $1,250 a month by the Territory of Hawaii.