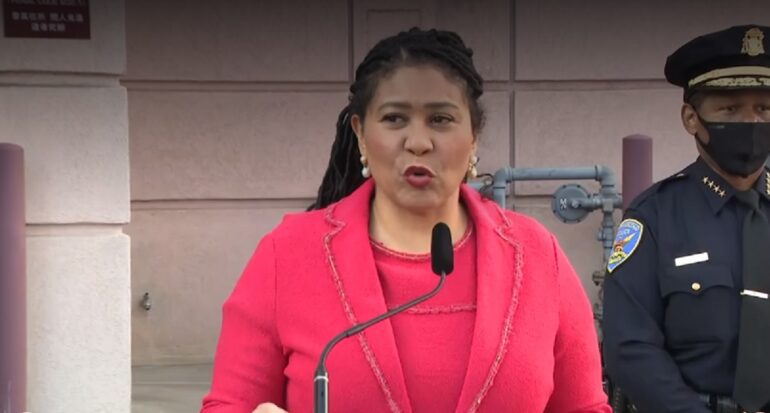 Mayor Breed laid the blame for the rise in anti-Asian hate in the city and nationwide on former President Trump and his “China Virus” rhetoric at the start of the COVID-19 pandemic, even though CNN actively called the virus the “Wuhan Virus” or “Chinese Virus” at the beginning of the pandemic for months before President Trump piggybacked on the term.

“That’s only people that are reporting those crimes. I know that there are a number of people that are not reporting those crimes,” said Breed. “We want to make sure people feel safe, we want to make sure people are comfortable with reporting. We are aggressively in the process of doing recruitment with the police department. We are doing everything we can as the department has a number of people who are absent because of COVID to fill those officers with overtime so that we can make sure these communities are protected as we promised.”

A complete 180 of Mayor Breed’s “defund the police” policies.

According to KPIX5, preliminary police data shows the number of AAPI hate crime victims in San Francisco rose from nine in 2020 to 60 victims in 2021, a 567% increase.

“The number of hate crimes targeting members of our AAPI communities is alarming, but it’s important to remember that San Francisco police officers have made arrests in the majority of these cases,” Chief Scott said in a prepared statement. “In fact, one perpetrator investigated and arrested by our Taraval Neighborhood Team in was charged with 31 hate crime enhancements alone — more than half of last year’s cases. Hate crimes represent one of SFPD’s highest clearance rates for any crime category, and we hope that sends a forceful message to would-be hate criminals considering any kind of bias-motivated attack in our City — San Francisco will hold you accountable.”

Chief Scott urged those attending Lunar New Year gatherings in the city to be vigilant of their surroundings and of strangers, although he stopped short of what most of those strangers will probably look like.

Scott also pointed out his department has expanded the number of languages that can be used by people to contact the department and urged citizens to report any suspicious activity to police, reports KPIX5.

“The reason being, it may help a future case if the individual who’s committing those types of acts later commits a hate crime,” said Scott. “That may help the case. So we still need you to call.”

San Francisco Supervisor Gordon Mar, who authored and passed a crime data disclosure ordinance back in 2019 in response to increased attacks against the Asian-American community, said on Tuesday that he was pushing for a multi-level response to the current terroristic attacks.

“This astronomical rise in anti-Asian hate crimes vindicates and affirms the long-held feeling in the Asian community that they are being targeted,” said Mar in a press statement. “This is a crisis, and requires a crisis-level response … That’s why I commissioned a comprehensive Citywide API Community Violence Prevention and Victim Support Plan, created the Storefront Vandalism Relief Grant Program, and increased resources for community ambassadors, senior safety escorts, victim services, and cross-racial community building.”