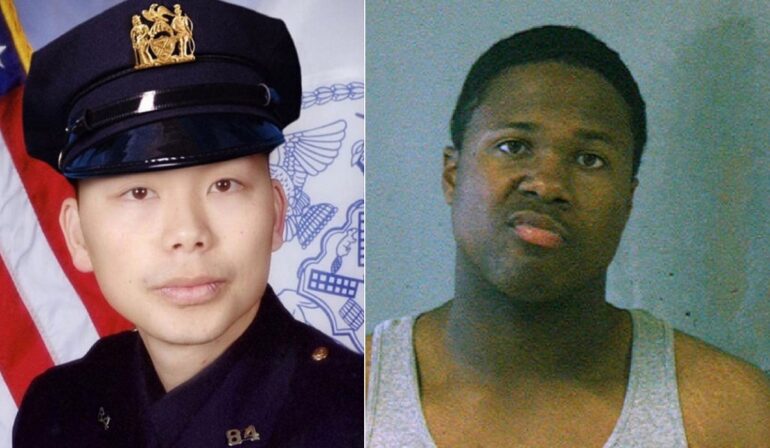 Brinsley made very clear through social media these killings were “revenge” for the deaths of Erica Garner and the shooting death of Michael Brown, both were African-American men who were killed by police. Brinsley also shot and wounded his ex-girlfriend, Shaneka Thompson in Baltimore earlier that day, according to The Post.

Ramos and Liu were eating lunch in their marked cruiser in Bedford-Stuyvesant near Tompkins and Myrtle Avenues when both were shot in the head, according to ABC7.

It should be noted Obama’s Justice Department led by African-American Attorney General Eric Holder cleared Officer Darren Wilson of any wrongdoing in the shooting death of Michael Brown after an extensive investigation. Brown assaulted a South Asian convenience store clerk and attempted to disarm responding Officer Wilson before getting shot and killed.

Instead of addressing Michael Brown’s shooting was declared legal by an African-American Attorney General, Black Lives Matter continues to pretend Wilson’s innocence was a “sham.”

Ismaaiyl Abdullah Brinsley and members of the Nuwaubian Nation believe Africans are the superior race and everything was invented by Black people, including the selective breeding of Caucasians by ancient Africans (Egyptians).

In a November 10, 2004 letter, Nuwaubian Nation wrote, “The Caucasian has not been chosen to lead the world. They lack true emotions in their creation. We never intended them to be peaceful. They were bred to be killers, with low reproduction levels and a short life span.”

Just hours after both police officers were pronounced dead, Mayor de Blasio and his entourage walked through the third-floor corridor of Woodhull Hospital. Dozens of NYPD officers silently turned their backs on the mayor in protest for his lack of support for law enforcement.

Mayor de Blasio approached a group of police officers in the hospital and told them, “We’re all in this together.” In response, one officer famously said, “No we’re not.”

Officer Wenjian Liu actually made headlines in October 2021 when his widow finally started receiving benefits for his child who was born two years after his death.

On the night Wenjian Liu succumbed to his injuries, under the request of his widow Peixia Chen and with the approval of family members, medical doctors retrieved and collected Liu’s semen for preservation to allow Chen the chance to conceive a child.

Chen and Liu were only married for a year before he was murdered. Doctors were later able to extract sperm from Liu’s preserved semen and artificially inseminated Peixia. She successfully became pregnant in early 2017 and gave birth to a girl named Angelina in July 2017.

Peixia Chen attempted to use her late husband’s NYPD benefits plan to file for Child Survivor Benefits with the Social Security Administration. She was denied twice due to an outdated legal definition because her late husband did not sign a consent form and there were no witnesses to show Liu gave permission to use his sperm.

Senator Andrew Gounardes, who represents parts of Brooklyn, stepped in and helped change the technicalities surrounding Peixia’s predicament and she was later given Child Survivor Benefits.