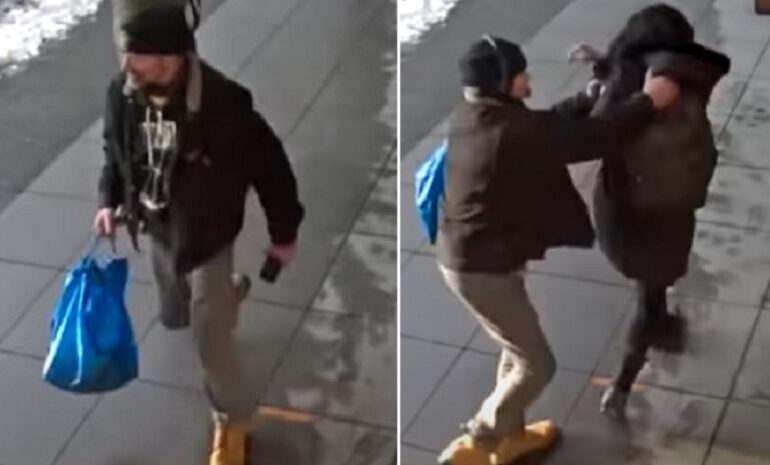 VANCOUVER, British Columbia—Bloomberg called Vancouver the “Anti-Asian Hate Crime Capital of North America” last year because more anti-Asian hate crimes were reported in Vancouver than the top 10 most populous U.S. cities combined; the Canadian city only has a population of 700,000 people.

Vancouver, San Francisco, New York, all pride themselves as being the most “progressive” and “morally superior” cities on earth because of their liberalism. These cities can add one more moniker, they’re also the “most racist” cities in North America as well because of their anti-Asian hate crimes.

Vancouver police released video footage of a man attacking a woman in a random and unprovoked assault on New Year’s Eve.

The savage attack occurred at around 3:30 p.m. on December 31, 2021, along West Georgia Street outside the Hotel Georgia, according to the Vancouver Sun.

The 17-second clip shows a man walking east along the sidewalk, suddenly stopping, and then going after an Asian woman walking in the opposite direction.

Authorities say the 22-year-old Asian woman was thrown against the exterior wall of the hotel and held down, but was able to escape her attacker’s hold.

Vancouver police began investigating the incident as soon as it was reported to authorities that day, she said. Police obtained the video from the hotel last week and released the footage Wednesday in the hopes that the public could help identify the man, reports the Vancouver Sun.

The assailant was last seen walking east along West Georgia. He is described as Caucasian and middle-aged. He was last seen wearing grey pants, a black jacket, a black shirt with a logo in the middle, a black toque, and headphones. He was also carrying a blue bag.

Anyone with information about the suspect or the incident is asked to call the police at 604-717-4022.