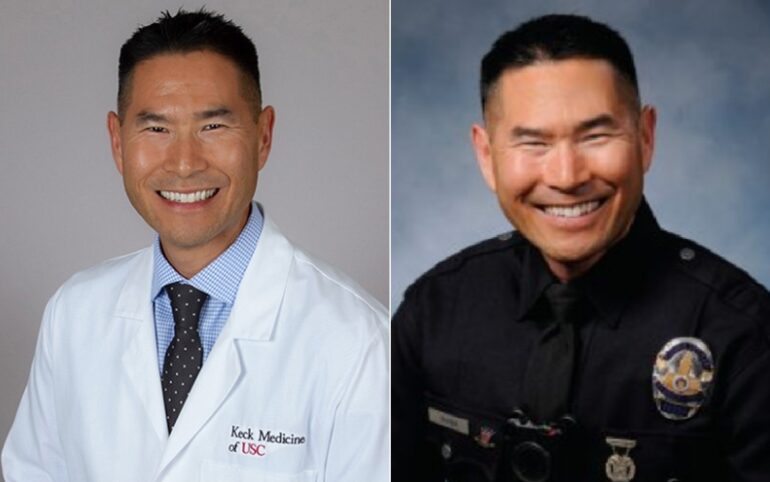 LOS ANGELES, California—Need reinforcement you have failed as an Asian? Meet Kenji Inaba. He’s one of the nation’s top trauma surgeons and Vice-Chair of the Department of Surgery, professor of surgery, and director for General Surgery Residency at the Keck School of Medicine of USC and he’s an LAPD officer…

For almost 100 hours a week, the Keck Medicine of USC doctor performs complex emergency surgeries at one of the busiest hospitals in the nation; Los Angeles County + USC Medical Center.

However, once a week, Dr. Inaba becomes Officer Inaba as he trades his scalpel for a badge and gun as a sworn reserve officer with the Rampart Division of the Los Angeles Police Department, according to USC News.

“It’s very important for every person to volunteer. My parents instilled that in me from when I was a little kid,” Inaba said. “Becoming a reserve officer seemed like a great way to give what knowledge and skills I have as a surgeon back to the community.”

Police departments usually have a staff physician who provides guidance on medical issues. When the LAPD pitched the idea to Inaba, he was intrigued and found a way to work LAPD’s grueling training into his schedule.

Inaba had to pass a psychological and physical test and undergo intensive background screening. His family members were interviewed, along with his neighbors. He then had to complete more than 700 hours of training in wide-ranging skills, including how to make an arrest, shoot and clean a gun, handle unruly crowds and protect himself with basic self-defense moves, according to USC News.

“They were extremely thorough in the way they educated me,” Inaba said. Even though he is a highly skilled surgeon, he couldn’t skip the emergency medicine course. “I sat through every hour of that first-aid training. It goes to show you how seriously they take the process.”

Dr. Inaba also conducts research on hemorrhage control and diagnostic imaging; contributing to more than 450 scholarly articles since 2003. He also regularly steps into the operating room to patch up injured patients to keep his skills in tune.

According to USC News, Inaba became a sworn peace officer in 2016 and completed his 400-hour probationary period. Now he rolls out with his regular partner, Ryan Nguyen, at least a few times every month. He patrols the streets of areas like Silver Lake and Echo Park in uniform, beginning a 12-hour shift at 6:30 a.m.

“It’s not for everybody, and there’s no getting around the fact that there is risk,” Inaba said. “But for the right person, it’s so satisfying.”

If our parents are going to judge—and we know they will judge—the only high profile Asian that can give Inaba a run for his money is 37-year-old Johnny Kim. Former Navy Seal, doctor (Harvard Medical School), and NASA astronaut for the 2024 mission to the moon.