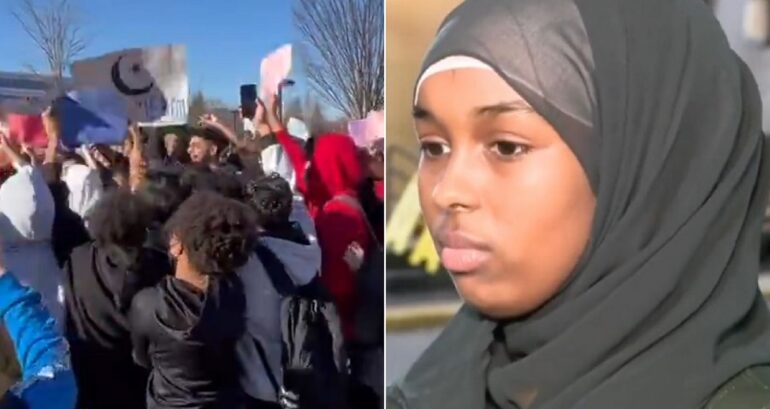 FAIRFAX COUNTY, Virginia—Following a violent brawl involving a hijab that occurred at Fairfax High School on December 14, which prompted mass student protests, the Fairfax Police Department has concluded that there is no evidence of a hate crime, reports the Post Millennial.

Ekran Mohamed said she was called racial slurs, was pushed by two male classmates of Egyptian and Asian descent, and had her hijab pulled, revealing her hair.

According to Ekran’s aunt via Instagram, a male Egyptian student “drew the Islamic flag and put a cross on it, like a red cross, like an X,” during a monthly meeting in marketing class.

Following that, the Asian male student tried to grab Ekran’s hijab from the back. She turned around and ended up grabbing the Asian male’s hair and punched him in the stomach. The Asian student then threw her into a desk “WWE” style, which caused bruising to the left side of her body.

Paramedics were called after Ekran collapsed on the floor because she couldn’t “breathe.” The school later stated Ekran was simply having a panic attack.

Soon, hundreds of students skipped school to protest the “vile anti-Black, anti-Muslim” racism going on at Fairfax High School and demanded justice. The protest was led by CAIR (Council on American-Islamic Relations). Over 19,000 signatures were gathered on Change.org.

Huge crowd of Fairfax HS students protesting an assault against a Muslim classmate. Tuesday, the victim says she and her friends were the victims of racial slurs in school. The victim says when she stood up to one of the bullies, he threw her into a desk and removed her hijab. pic.twitter.com/M2741OcC1p

Well, after being interviewed by police, Ekran admitted she wasn’t called a racial slur or had her hijab ripped off during the brawl, however, she still maintains she is the victim of a hate crime, reports WTOP News.

Ekran’s lawyer, Abed A. Ayoub replied, “Another important note about what happened—The victim is Somali, and I have no doubt given the facts that part of the reason she was targeted is because she is Black. Hate Crimes are often layered, and a person can be targeted for a number of reasons.”

The students say the victim & the boy who assaulted her were each given an in-school suspension which they served together, in the same room, Wednesday. FCPS admin confirm there was an incident Tuesday but aren’t saying anything more about the details/punishment.@nbcwashington pic.twitter.com/OEWAdckNBk

The City of Fairfax Police found no evidence of hate crime in the altercation that occurred at the high school. “The investigation revealed there were no racial comments made by either student.”