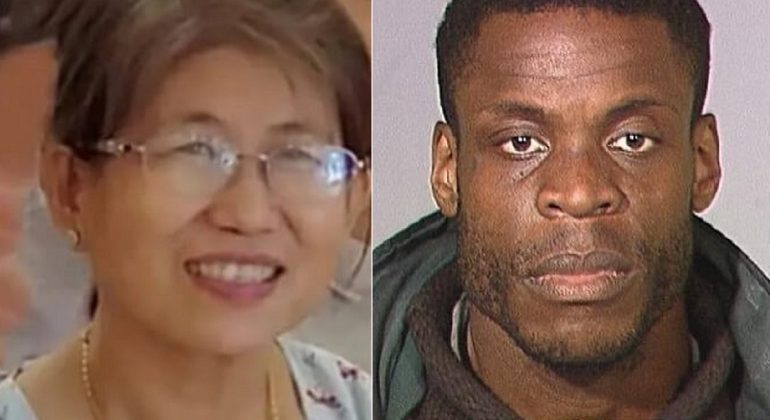 Back on July 17, 2021, around 9:40 a.m., 58-year-old mother Than Than Htwe sustained massive head trauma when Robinson tried to rob her son inside the Canal St. “N” subway station in Manhattan.

Robinson grabbed the 22-year-old son’s backpack as he walked up the stairs from the Canal Street subway station in Chinatown with his 58-year-old mother.

The suspect’s actions caused both son and his mother to tumble down the stairs, critically injuring the mother. She was rushed to the hospital and underwent emergency brain surgery. However, she would never regain consciousness.

Htwe remained in a coma for 10 days before passing away.

Than Htwe moved to the United States from Myanmar in 2018 to be with her immediate family. She is survived by her husband Myint Shien and her son.

🚨WANTED for ATTEMPTED ROBBERY: On 7/17 at 9:40 AM, inside the Canal St "N" subway station in Manhattan, the suspect tried to forcibly remove a bag, causing two victims to fall down the stairs, leaving one victim in critical condition. Any info? DM @NYPDTips or call 800-577-TIPS. pic.twitter.com/hRiM0brDZa

According to Sarah Y. Kim, Robinson has been charged with murder and two counts of manslaughter.