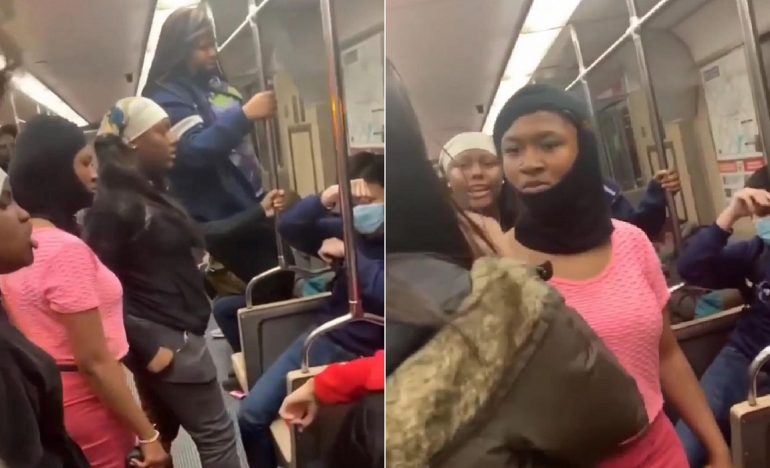 The assault happened on a train near the Erie station around 3:30 pm on Wednesday, November 17.

The Asian female can be seen being prison stomped by the group of African-American females.

Many African-Americans are now trying to justify the attack by claiming the group of Asian students who were seen in the video being assaulted started the confrontation by using the N-word.

However, that claim was quickly debunked by eyewitnesses who were on the train. One witness quickly replied, “Not true at all, that is false info.”

One person stated, “My son is [a] central student. That group been known as attacking Asian students either on the street, subway station or the car. Those low life…need to put up in their place!!!”

An eyewitness who directly witnessed the group of African-Americans before and during the attack said, “Those girls got on my car talking about what’s wrong with Chinese ppl. Then they saw those kids on the next car went through the doors and next thing all we could see was that girl on the ground. They knew exactly what they were doing.”

There has been a substantial amount of anti-Asian racism by the African-American community and within the school district in Philadelphia. Over a decade ago, more than 30 Chinese students were physically attacked on a daily basis by African-American students in a South Philly high school.

The school principal—who was an African-American woman—refused to admit Black people attacking Asians was racist. The Justice Department had to step in and literally lecture to the principal that Black people can be racist.

“The District and the School acted with ‘deliberate indifference‘ to the harassment against Asian students and ‘intentional disregard for the welfare of Asian students.“

The school principal was later forced to resign after claiming “Black people can’t be racist.”