Man Dressed as the Joker Stabs 10 People in Tokyo Train 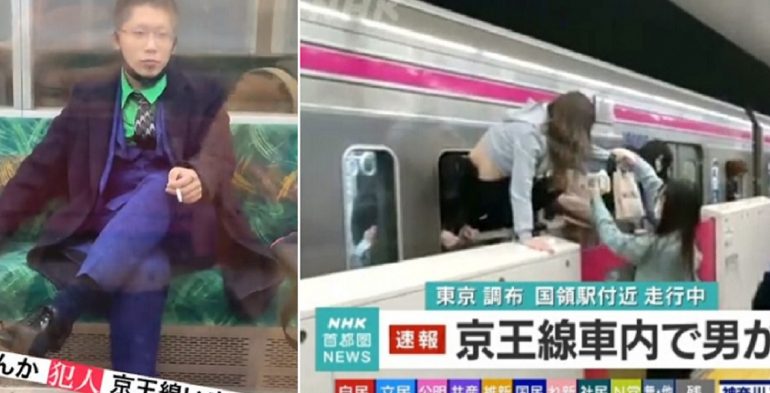 TOKYO, Japan—A 24-year-old man dressed as Batman villain the Joker has been arrested after allegedly stabbing 10 people onboard a Tokyo commuter train.

Witnesses also described the attacker pouring oil around the carriage before lighting it on fire, causing panic among passengers, according to the NHK.

A total of 17 passengers were injured, three of them seriously.

The attacker was arrested on the spot. Local media outlets reported that the attacker “wanted to kill people so he could be sentenced to death.”

“I thought it was a Halloween stunt,” one witness told reporters. “Then I saw a man walking this way, slowly waving a long knife.” The witness described the knife was covered in blood.

Panicked passengers scrambled to escape, some climbed through train windows while others fled to other compartments as smoke began to fill the train

🚨 | NEW: The alleged attacker in Japan, in a “Joker” costume. Sitting and casually smoking after stabbing and spraying hydrochloric acid on passengers on a train in Tokyo, and then setting everything on fire

It’s a well-established fact Tokyo is one of the safest cities in the world, according to the Safest Cities Index. For comparison, New York City is ranked #15 in 2019. Attacks like these are very rare.

However, this is the second stabbing aboard a train in Tokyo. Back in August, one day before closing ceremonies at the Tokyo Olympics, a 36-year-old man stabbed 10 passengers aboard another commuter train.