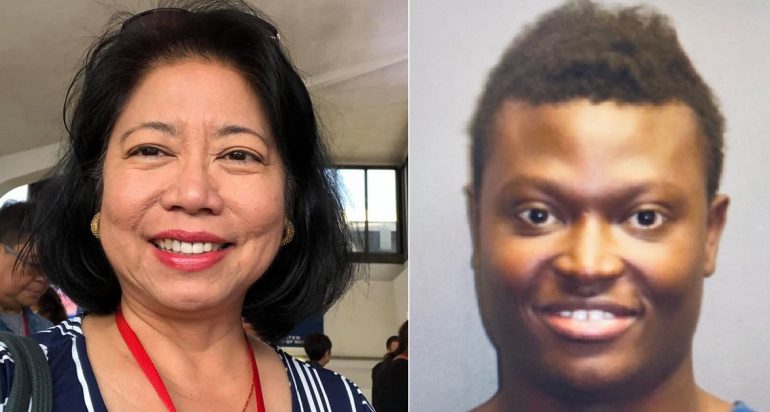 TIMES SQUARE, New York—Maria Ambrocio, 58, the New Jersey cancer nurse who was violently knocked down by Jermaine Foster died Saturday evening after clinging to life for a day and a half, reports the New York Post.

Minutes earlier, Foster proclaimed himself to be an “African prince” to an earlier victim.

“They just pulled the plug on her. She’s gone,” Maria Ambrocio’s brother Carlito told The Post at 8:28 p.m.

58-year-old Maria was walking through Times Square around 1:30 p.m. Friday with friends after escorting a friend to the Philippines Consulate in Midtown. She decided to have lunch before heading home, according to The Post.

It was around that same time 26-year-old Jermaine Foster allegedly went on a crime spree, snatching a smartphone out of a woman’s hands at West 41st Street and Broadway and then slamming into Ambrocio—plunging her to the ground head first. Foster fled the scene.

“There was a lot of people and we were trying to maneuver,” 70-year-old Emilia Cruz stated. Cruz added she saw the suspect being chased.

Ambrocio’s cousin told The Post she hadn’t seen Maria for nearly two years because of the pandemic and was hoping for a family reunion for the upcoming holidays.

“Her friend told me to hurry up because her blood pressure is dropping and she is brain dead. She doesn’t have much time, so I have to hurry,” Maria’s younger brother Carlito stated to The Post.

Ambrocio’s husband was at her side as family members and friends said their final goodbyes at Bellevue hospital.

Maria Ambrocio was a native of the Philippines, originally. She became an oncology nurse who previously worked at Beth Israel Hospital in Manhattan. She resided in Bayonne.

“Crime has been rampant in the city. If they are mentally ill, why are they on the streets? They should be taken care of,” Maria’s cousin stated.

26-year-old Foster is homeless. He was apprehended charged early Saturday morning with robbery and assault in connection with the incidents, reports The Post.

Foster’s alleged reign of terror began 90 minutes before pushing Ambrocio to the ground. He barged into a woman’s apartment on Sixth Avenue and 38th Street before swiping a different woman’s smartphone.

Foster then began breaking things in the apartment and sat on the woman’s couch.

Foster ran off before the NYPD could detain him during the apartment break-in incident.