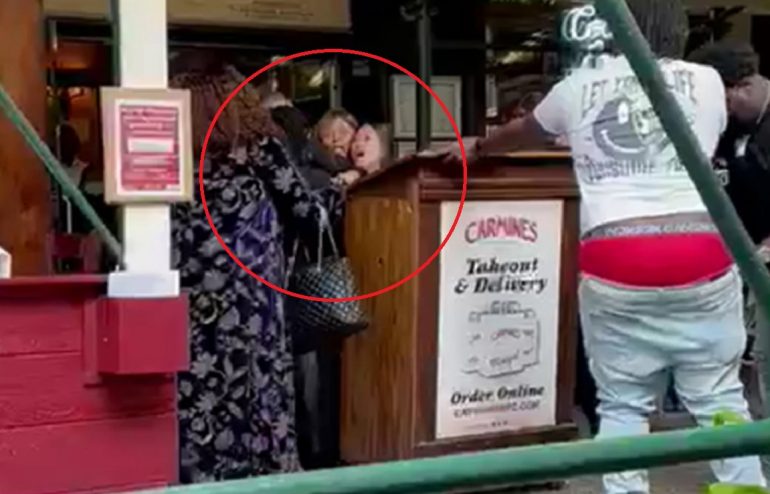 According to the New York Post, one of the tourists claimed she’s “100 percent innocent.”

“Clearly somebody’s off. It makes no sense,” said Jeffery Bank, owner of Carmine’s on the Upper West Side.

“You don’t assault people for following the law. You travel to different states—different states have different rules and regulations, and all our employees are just doing that. Clearly these people have issues,” Bank continued to state.

49-year-old Sally Recehelle Lewis of Houston, 44-year-old Kaeita Nkeenge Rankin, and 21-year-old Tyonnie Keshay Rankin, both of Humble, Texas, were charged with assault and criminal mischief in Thursday’s vicious assault outside Carmine’s, according to the New York Post.

The three African-American women are accused of punching a 24-year-old Asian-American hostess. The assault caused pain, bruises, and one of the women broke off the employee’s necklace.

Restaurants can face up to a $1,000 fine per violation for not enforcing the city’s proof of vaccination mandate.

The three women were released without bail. The case is currently pending.

The women are now changing their story and claim the Asian-American hostess called them the “N-word” after they were unable to show proof of vaccination.

Allegedly, the hostess told the women, “Sorry, you can’t enter, n***er,” and then lunged at them first and they were forced to defend themselves against Asian hostility.

A lawyer for Carmine’s vehemently denied the Texas women’s accusations of racism.

Mother & Daughter Injured During 4th of July Will Never Recover

“Any claim that they were racially profiled is a complete fabrication, disingenuous, and outright irresponsible,” Attorney Carolyn Richmond told the Daily News.

Hawk Newsome, the co-founder of Black Lives Matter New York, is 100 percent backing the three African-American women and is planning a protest on Monday.

A civil rights lawyer, Justin Moore told the Daily News, “This hostess clearly has some anger management issues and unfortunately her aggression and her violence led to something that three Black women are being punished for.”

Many African-Americans are backing the women’s story. “These Asians need to show proper respect. They’re only guests here and leeching off the accomplishments of BLACK innovation. I find it disgusting that these violent people coming from war-torn jungle countries managed to fool Americans into thinking we’re attacking them. Its actually the other way around.”