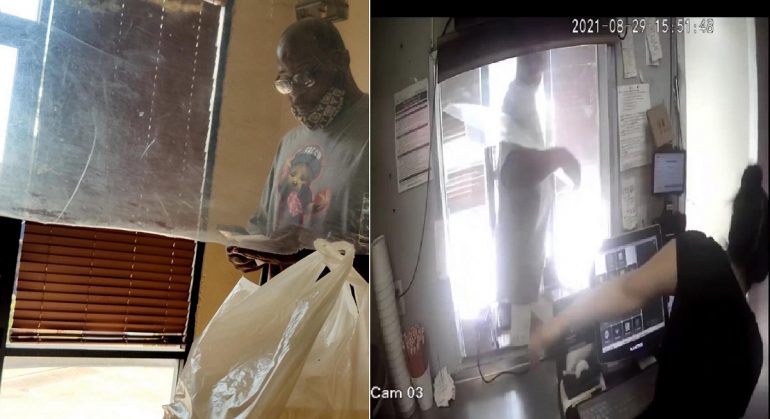 SACRAMENTO, California—“Had a customer get mad because we didn’t charge him for egg rolls then he threw his food at me so I pepper-sprayed him and he threw me into the street. Good times at Happy Takeout,” the victim wrote on her Instagram.

Diana was working at her family’s restaurant Happy Takeout in Sacramento Sunday afternoon when a customer picking up his order became “really aggressive” toward her coworkers after he didn’t see an order of egg rolls in his take-out order, reports Dion Lim.

Diana gave the customer a free egg roll. However, he wanted a whole order and was mad the five-piece egg roll order wasn’t in his to-go bag.

She tried to deescalate the situation and showed the customer she never charged him for the egg rolls, printed out an itemized receipt to show him, and that actually caused the customer to become even more irate.

The customer began claiming the restaurant raises prices for no reason and started calling Diana a “dumb b**ch” multiple times.

CCTV footage of the attack

Diana then pepper-sprayed the customer and was picked up and thrown into the street. The customer then left the scene.

Diana called the police, however, they were not able to do anything.

“Also cops say they can’t do s**t even tho they have his number and everything,” she wrote on Instagram. “And just an idea I’m 5’4 120lbs and he was 6’4 and like 250lbs. Apparently, if they flee the scene by law they can’t do anything…”

Diana suffered minor injuries and was treated at a hospital for a few scrapes and bruises.

The customer later returned to the restaurant with a few friends and started harassing her employees.

“He just came back to the restaurant with his friends to harass the employees there,” Diana wrote. “Cops were called, no one came.”

The customer has since been identified as Anthony Brewer. He was unapologetic toward Diana on his Facebook post and many African-Americans sided with him in the comment section.