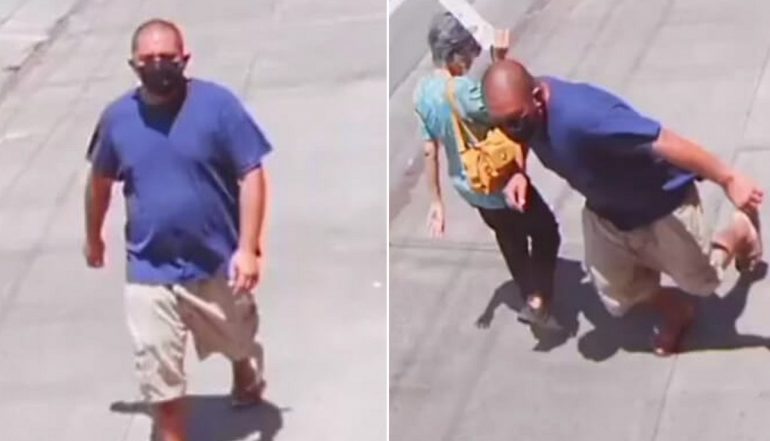 HONOLULU, Hawaii—Police are searching for the suspect responsible for a violent attack on an elderly Asian woman on Saturday along South Beretania Street in Honolulu.

Surveillance camera shows the elderly victim walking along South Beretania Street when a male in a blue shirt walking in the opposite direction violently pushes her down—very similar to attacks Asian elders experience in Oakland, California.

The victim falls to the ground over the curb and lands on the shoulder of the road and hits her head. The incident happened around 11:30 a.m. in front of Wong’s Drapery, according to Hawaii News Now.

Laura Mosakaite is an employee at Wong’s Drapery and heard the victim’s cries for help and ran over.

“It’s horrible. I was shocked. I didn’t eat for the whole day,” Mosakaite told Hawaii News Now. “She’s so tiny and she was crying for a good 30 minutes. It was horrible, I was crying too.”

Mosakaite said the elderly victim appeared to be in her mid-70s to 80s and was eventually able to walk away from the incident. However, she had bruises on her wrists and complained of back pain.

According to other witnesses, the incident appears to be a hate crime because the suspect didn’t take the elderly woman’s purse. He didn’t even attempt to rob her, he simply pushed her down for the sake of pushing her down.

“Totally unprovoked shoves her into the roadway. It could have ended badly. She could have been run over she could’ve been killed,” Sgt. Chris Kim of CrimeStoppers Honolulu said.

“To the guy who did this, turn yourself in. You are gonna get caught without a doubt in my mind,” Kim said. “You are going to get identified. Turn yourself in. People of Hawaii are outraged when they see this.”

Kim says because it is a crime against an elderly individual, the suspect could face harsher penalties when caught.

“I believe he’ll do it again. He did it once. I just want to see this guy get caught,” Wong added.

Police identified the suspect as 37-year-old Jordan Wong. He was arrested on Kinau Street Tuesday morning.